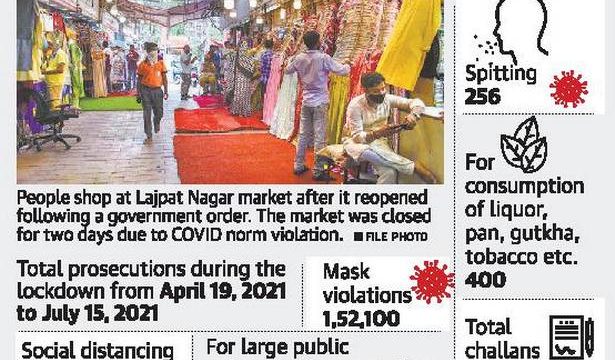 Survey done in areas with high footfall in 15 police districts

The Delhi police have prepared an intelligence report on religious places in the national capital that see higher footfalls, said a senior officer on Friday.

The move has been taken after the second wave to check the implementation of COVID-appropriate behaviour in the areas.

The report accessed by The Hindu found that a survey was done in all 15 police districts and the list includes religious places like Jama Masjid and Akshardham Temple.

The report states that at Hanumaan Temple in Connaught Place and Gurdwara Bangla Sahib, both in New Delhi district, COVID protocols are being maintained partially.

Most of the people were seen without masks inside the temple and the gurdwara.

According to the report, COVID-related guidelines were not being followed in the religious places in the south-east, south and north-west Delhi areas.

It mentioned that in the south-east district, the Kalkaji Temple is open for devotees and the gatherings rise to around 100-125 people on regular days. The guidelines were also not being followed.

The case was similar in the south district.

“In the south district, all churches and nine masjids are closed for devotees. However, in two masjids, three mandirs and 10 gurdwaras, COVID protocol is not followed,” states the report.

After getting reports from a special branch of Delhi police and district administration concerned, several markets, including Karol Bagh, Lajpat Nagar and others, were ordered to shut for a couple of days due to overcrowding and flouting of COVID norms.

“We are regularly holding meetings with market associations and instructing them to avoid overcrowding and ask visitors to follow COVID-appropriate behaviour,” said a police officer.

Meanwhile, all police districts have been instructed to be vigilant and ensure places with high footfalls follow COVID-appropriate behaviour. Teams have been deployed at markets and religious places to challan violators, said the officer.