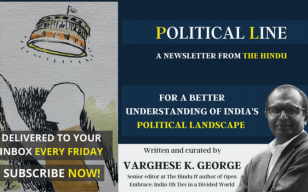 My apologies for writing Political Line a full day late. But then, the delay has its benefits, as it turns out. The schedule for Assembly elections in five States – U.P., Punjab, Uttarakhand, Manipur and Goa — has been announced today. I have written on why these elections are exciting: six reasons why the five State elections are important for national politics.

In a separate piece, I have analysed the new wave of welfarism that is sustaining democratic politics around the world — the U.S. or India. “The ‘there is no free lunch’ politics of the 1990s has been turned on its head. There will be free lunches, and suppers for a song. Or a vote.” I also explain what necessitates this welfarism.

Ram and Krishna in U.P. elections

After Ram and Ayodhya, the BJP may be looking at Krishna and Mathura, Anuj Kumar observes in this fine piece.

Apparently Lord Krishna comes to Samajwadi Party leader Akhilesh Yadav’s dreams every night to tell him that he will form the government and establish “Ram Rajya” in Uttar Pradesh after the State’s upcoming Assembly polls! He went to Ayodhya and is wooing Brahmins.

You must have heard a lot about how Prime Minister Narendra Modi was held up on the road in Punjab, causing a major security scare. In all the noise, it was easy to miss the crux. We explain it in this editorial. “The critical question that is to be probed is who made the decision that the Prime Minister could, and should, travel by road for more than 100 km, from Bathinda to Ferozepur and what inputs went into making that decision.”

EWS quota remains, but the core question is unresolved

The Supreme Court has allowed the Centre to continue with the 10% quota for economically weaker sections (EWS) for medical admissions this year, but the key question remains unresolved. The EWS quota is meant for those who are not eligible for any other reservation and earn less than ₹8 lakh in annual income. Members of OBC communities earning more than ₹8 lakh become ineligible for reservation, as they fall under the category of ‘creamy layer.’ The SC is curious to know how did the government arrive at the same income limit for excluding a section from OBC quotas and including a section in EWS quotas. The government claims that both are different. The SC will hear the merit of the argument in March, and also the constitutionality of the EWS quota.

Karnataka: Congress upbeat, CM not quite

Chief Minister Basavaraj Bommai is on the defensive and Congress State chief D.K. Shivakumar is upbeat after the recent local body elections in Karnataka. In this interview to Nistula Hebbar, Mr. Shivakumar says Mr. Bommai has been pushing for legislation he thinks will emotionally engage his party’s base.

Assam Chief Minister Himanta Biswa Sarma said the demand for the withdrawal of the Armed Forces (Special Powers) Act of 1958 would see some positive developments in the next 45 days. He also said the Assam government would take some pragmatic decisions on the contentious Act as the “era of tribal militancy” was over.

A Naga holds a placard during a rally in Kohima. File | Photo Credit: AP

Did he speak a bit too early? The removal of the “Naga” tag from certain ethnic groups inhabiting three districts of Arunachal Pradesh has angered the NSCN that has warned of ‘unpleasant’ outcomes. Parliament in August 2021 passed the (Scheduled Tribes) Order (Amendment) Bill, 2021, seeking to change the nomenclature of certain tribes from Arunachal Pradesh mentioned in the Constitution (Scheduled Tribe) Order of 1950. Consequently, the communities clubbed as “any other Naga tribe” came to be officially recognised by their individual names such as Nocte, Tangsa, Tutsa and Wancho. The NSCN (I-M) said the change in nomenclature had “blatantly insulted and humiliated the sentiments and rights of the Nagas of TCL [Tirap, Changlang and Longding districts]” and “wilfully undermined, distorted the identity and denied the existence of the Naga people” in Arunachal Pradesh.

If want to know more about AFSPA and why it is controversial, this explainer is helpful.

On a visit to Tripura and Manipur meanwhile, Mr. Modi said Tripura has potential to become the gateway to the Northeast.

Top leaders of the People’s Alliance for the Gupkar Declaration (PAGD) including three former Chief Ministers — Farooq Abdullah, Omar Abdullah and Mehbooba Mufti — were placed under house arrest last Saturday ahead of a scheduled joint protest against the J&K Delimitation Commission’s draft proposal.

The Centre yielded to Gujarat’s demand for a deferment of the hike on the Goods and Services Tax (GST) on textiles from 5% to 12% from January 1.