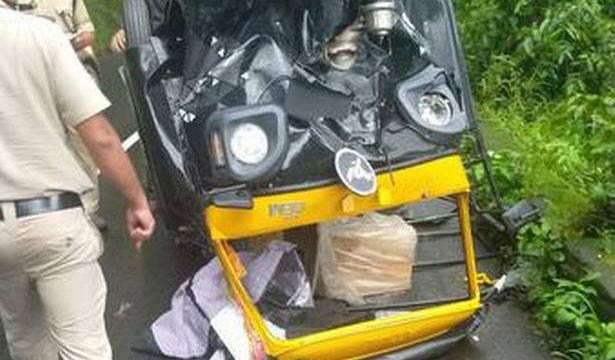 Poor lane discipline and speed limit violations have emerged as threats again for motorists on the accident-prone Thamarassery Ghat Road, which was renovated recently. The haste shown by small vehicles to overtake heavy ones, including trucks and goods carriers, is cited as a major risk factor on the inter-State mountain road.

According to members of the Ghat Road Protection Committee, the police are yet to crack the whip on rampant violation of lane discipline. In the absence of a permanent mechanism with surveillance camera, the practice cannot be curtailed, they said.

Wayside traders are of the view that the widening of hairpin curves to facilitate easy movement of heavy vehicles has had a detrimental effect, as violation of speed limits by small vehicles has become rampant. Incidentally, amateur riders and tourists resort to reckless race through the mountain pass, they attested.

“The absence of a permanent rescue mechanism on the road is a matter of concern. In the event of an accident, rescue teams have to come from distant locations, which hits the pace of life-saving efforts,” said V. Manoharan, a local volunteer. He complained that the demand to sanction an ambulance for the mountain pass was yet to be addressed.

Meanwhile, the Ghat Road Protection Committee has sought an effective mechanism to regulate the speed of vehicles during monsoon in view of slippery roads. Those unfamiliar with the route are likely to face safety challenges thanks to the freehand enjoyed by other motorists in the absence of proper checking, the committee reminded.

“A proper enforcement of lane discipline can largely contribute to safe driving on the route, but the police are indifferent to the demand. Though wayside parking has been banned to ensure passengers’ safety, it is more honoured in the breach than in the observance,” said K. Sukumaran, another local volunteer. He pointed out that those who flouted lane traffic rules should be fined on the spot.