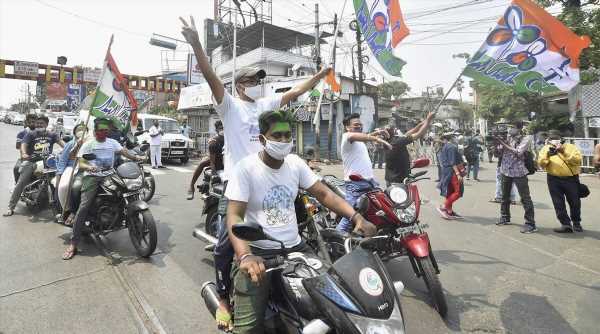 This is a litmus test for principled politicians of all hues. Politics exists because democracy and free choice exist. But wait, that’s not the news. The news is that the political party that came second is having to set up helplines and publicise its phone numbers among its workers. During a pandemic, one might think that these are helplines for COVID-affected but they are not. These are helplines for workers impacted by the violence unleashed on its party workers after the election results were announced.

This shameful development has happened after TMC won the elections in West Bengal.

There are four other states or union territories where election results have been announced but such vendetta and vindictive violence have not been reported from there.

Kerala is also known for political violence but things seem to be peaceful there. Assam is seeing nothing untoward despite a high-octane election campaign. Tamil Nadu and Puducherry are peaceful. But it is only in TMC-ruled Bengal that homes are being burnt, BJP workers are being lynched and mobs are taking over the streets. The unleashing of violence to target political opponents that acquired a new level of viciousness during the 2018 panchayat polls continues.

There were “intellectuals” waxing eloquent about the “victory of federalism” and “victory of the idea of India” when the eventual results of the Bengal elections were announced. It has now been made clear to us what it means for the country.

It cannot be articulated more clearly that “federalism” and “idea of India” mean that mobs will prowl around the houses of people who associate themselves with the BJP, a legitimate political party that has won the votes of crores of people. Lofty jargon is just intellectual cover for violence on the streets by which the liberal elite of the country seeks to tighten its loosening grip over the electorate.

If bullying the electorate is the “idea of India”, then it is an existential danger for our democracy.

If this is what the TMC resorts to after winning, imagine the kind of chaos Mamata Banerjee would have unleashed if she had lost. She would have surely put Donald Trump and his supporters who swamped Capitol Hill to shame.

In contrast, the BJP which jumped from nearly nothing to 77 seats in Bengal, humbly accepted the verdict of the people. They did not question the EVMs, did not point fingers and neither did they allege any malpractice.

While the party that came second is showing grace, the party that is forming the government is baring its fangs on the streets. Mamata Banerjee was issuing veiled threats of “looking after” her opponents after the elections and her lumpen cadre are following up on them now.

This is a litmus test for principled politicians of all hues. Politics exists because democracy and free choice exist. When democracy is threatened, if someone thinks they will choose tactical silence because they are not at the receiving end, then they misunderstand the dangers of anti-democratic lumpenism. Once the precedent is set, it will not take too much time for mobs to reach other doors.

From the media to the Governor of the state, everyone is appalled at what is happening in Bengal but other political parties are silent.

In any case, nobody expects other parties of the national Opposition to stand up and save democracy in Bengal. They could have said they have no stake in it if they had not issued glowing tributes to Mamata Banerjee. The Congress party went one step ahead and even disowned the efforts of their own Bengal unit. So what if their own house is on fire, it matters to them that BJP workers are being “taught a lesson”. But now, the blood that is being spilt on the streets of Bengal is on their hands too, given that they identify themselves with Mamata Banerjee’s vindictive politics.

At such times, one only has to derive strength from the courage of the common BJP worker who went out to the streets to work for her convictions, despite suspecting that such violence would be unleashed at her for simply performing her role in democracy.

It is to protect the same workers that something needs to be done. TMC cadre and the leaders who egg them on must be given a stern message by any means possible. Because there are lives at stake.

West Bengal cannot be allowed to be run like a tinpot dictatorship where any political activism that the “Supreme Leader” does not approve of will be met with violence on the streets.

(The writer is a former journalist)