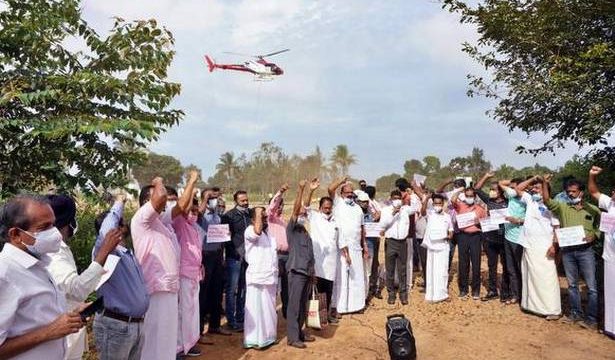 A group of people under the aegis of the Nilgiri-Wayanad NH and Railway Action Committee and traders’ organisations took out a march on Thursday to the helipad at Sulthan Bathery in protest against the alleged attempt to subvert the Nilambur-Nanjangud railway line project.

The base camp for the heli-borne survey for the proposed Thalassery-Wayanad-Mysuru railway line has been set up at Sulthan Bathery.

Inaugurating the march, action committee convener T.M. Rasheed said the proposed railway line had found a place in the pink book of the Indian Railways, and the previous UDF Government had allocated ₹8 crore to the Delhi Metro Rail Corporation (DMRC) for preparing a detailed project report (DPR) and conducting the final location survey for the project after obtaining permissions from the Centre and the Railway Board in 2016.

DMRC officials had said that the project would be completed in 2021, and that funds would not be a constraint for it, Mr. Rasheed said. But the LDF Government sabotaged the project by not providing funds to the DMRC claiming that the Karnataka Government had not granted permission for the survey, he alleged.

The Karnataka Government had informed Kerala that it would consider the project provided the railway line passed through the tunnel in the forest area and had recommended that the application be submitted in the prescribed format through the agency concerned. However, the Kerala Government is yet to take any positive steps, he said.

The Karnataka Government is yet to grant permission for a survey for the proposed Thalassery-Wayanad-Mysuru project, but the Kerala Government had released ₹18 crore for the ongoing survey which is restricted to a small region in the State, Mr. Rasheed said. Such a move will be opposed, he warned.

The protesters also staged a dharna in front of the base camp of the project.