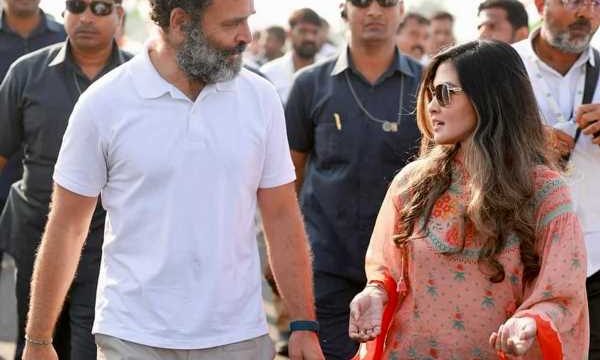 ‘I believe the Bharat Jodo Yatra has the power to unite a divided India.’

On November 17, Riya Sen joined Rahul Gandhi on the 71st day of his Bharat Jodo yatra.

The actress clarified that she had participated in the Bharat Jodo Yatra both as a proud citizen and as an actor.

Riya says she is grateful to be a part of an initiative that is focused on bringing the people of this country together.

Taking time out from her schedule to speak to Rediff.com Senior Contributor Roshmila Bhattacharya, Riya says, “I am sure the ruling party appreciates the effort put into this yatra and the importance that it holds for a democracy.”

What prompted you to join the Bharat Jodo Yatra?

I was invited by Rahul Gandhi’s team to join the yatra.

I decided to accept the invitation as I believe this yatra stands for a very good cause.

Where did you join? How long and how far did you march?

I joined the yatra at Akola in Maharashtra.

I walked for just over one hour, which I would approximate to be about five kilometres. 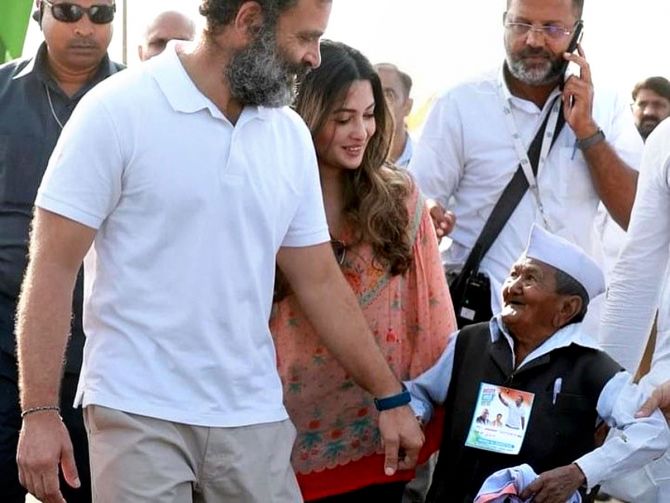 What was the turnout and on-ground response like? Anything or anyone in particular who caught your attention?

The turnout was very impressive and large crowds were present.

I was so impressed by the sheer number of people that the crowd itself completely held my attention instead of any one person in particular.

Can you tell us about your interaction with Rahul Gandhi?

My interaction with Rahul Gandhi was very positive. After meeting him, I truly believe that he is committed to this cause.

This was the first time I was meeting him and I found him to be an approachable person who was very welcoming of the crowd.

We spoke briefly about our families as both our fathers (Rajiv Gandhi and Bharat Dev Varma) have known each other; they were in the same school.

In fact, my sister (Raima Sen) and I have a very memorable photograph from our childhood with Mr Rajiv Gandhi. Can this yatra really unite a divided India? Anything you think you can do in your personal capacity?

As far as I could tell, given my limited time spent on the yatra, I do believe it has the power to unite a divided India.

In my personal capacity, I have already provided my support to the cause and will continue to do so.

Your mother Moon Moon Sen contested the elections twice as a Trinamool Congress candidate. Any plans of joining active politics on a Congress ticket if asked?

As of now, I haven’t thought of joining politics, considering I have been asked a few times. BJP politicians like Nitesh Rane and Amit Malviya say actors are being paid by the Congress to walk 15 minutes with Rahul Gandhi.

I refuse to believe that BJP politicians would make such silly allegations.

My uncle Jishnu Dev Varma is a senior member of the BJP and has not made any statements of this nature.

Any plans of joining the march again on a later date?

There are no concrete plans as of now, but I am open to it.

I believe this yatra is for a very good cause.

Are you apprehensive about repercussions about joining a march organised by an Opposition party?

I have no such apprehensions.

I am sure the ruling party appreciates the effort put into this yatra and the importance that it holds for a democracy.