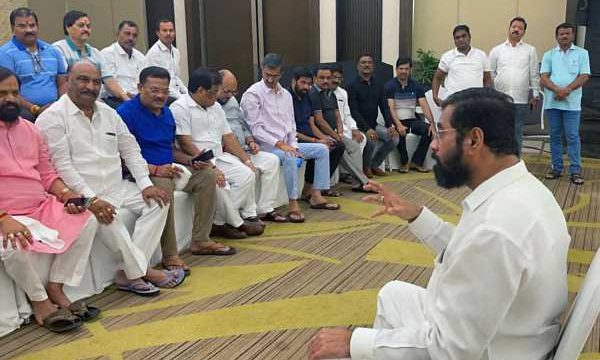 ‘We know how to deal with the BJP if push comes to shove.’

Three prominent MLAs in the Eknath Shinde camp tell Rediff.com that they believe the Bharatiya Janata Party will definitely try to undermine the influence of Eknath Shinde and his band of rebels, that they feel threatened by the BJP but they prefer to ally with their partner of more than 30 years than Sharad Pawar.

“The fears are true, but we know how to deal with the BJP if push comes to shove,” says a MLA Western Maharashtra, which is a common refrain from these three MLAs who refused to be named because the ministry formation is yet work-in-progress as Chief Minister Eknath Shinde keeps hopping between New Delhi and Mumbai.

Santosh Bangar, the MLA from Kalamnuri in Hingoli district and the last man to bolt from Uddhav Thackeray’s stable to join Shinde on the eve of the trust vote in the Maharashtra assembly on July 5, however, says he does not feel threatened by the BJP and is confident of the BJP’s support and the Shinde camp and the BJP will fight the next assembly election in Maharashtra in alliance.

Ministry Formation: ‘Shinde saheb will do justice with all of us’

While murmurs about there being dissatisfaction have begun surfacing from their camp owing to the delay in the expansion of the ministry led by Chief Minister Shinde and Deputy Chief Minister Devendra Fadnavis, the rebel Sena MLAs say there will be not much consternation among them once the allocation of portfolios is announced sometime before August 15.

The three MLAs are unanimous that Shinde will take care of not just the Shiv Sena rebels, but also the Independents and smaller parties who joined ranks with them.

“Hopefully, the ministry expansion will happen sooner. The previous government too took its own sweet time to allocate portfolios to its ministers,” says a rebel MLA who hails from north Maharashtra.

“It is true that not all 40 rebel MLAs will find place in the next government, but we are confident that Shinde saheb will do justice with all of us. He will definitely choose his ministers based on our merits, our capabilities to work at the district and grassroots level,” says a two-time rebel MLA from the Shinde camp who is on the list of 16 whose disqualification plea filed by the Uddhav camp is pending in the Supreme Court.

“I am visiting my constituency and have heard that saheb (Eknath Shinde) has been in Delhi (meeting with the BJP leadership) and we could see some positive moves in this direction. The sooner it happens, the better for all of us,” says the third MLA who feels threatened by how the BJP treats its alliance partners.

“From November 2019 till June 2022 we were Shiv Sena MLAs and now from 2022 till 2024 we will continue to remain so,” says Bangar. “Ministries come and go; your people, your supporters should be your priority and one should keep working for their development.”

Ask Bangar why he continued to remain with the Uddhav camp till just a day before the trust vote against Shinde on the floor of the state assembly and he justifies it thus: “The people in my constituency believed that if an ordinary Shiv Sainik (Eknath Shinde) is becoming chief minister, then I should vote for him and not against him. I am proud that I voted for Eknath bhai.”

“Nobody is scared of the BJP trying to dominate or gobble up the MLAs from our camp. So long as each one of us is confident of total support from our respective constituencies we are not scared of the BJP or Uddhavji,” says Bangar.

“The BJP needs the Shinde camp as much as we need the BJP, but then they have emerged as the Big Brother not just in the state but also across India,” says the two-time MLA while expressing his discomfiture as the ministry expansion keeps getting delayed.

Counters Bangar: “I am 100 per cent sure that BJP will stand with me in my constituency in 2024 just like they stood by me in 2019. The NCP (Nationalist Congress Party) has decided to completely destroy the Shiv Sena, but thanks to the BJP we parted ways with them midway and now feel comfortable to go to our people as followers of Balasaheb (Thackeray)’s Hindutva.”

“I did have a discussion with many of our MLAs about our future with the BJP after two-and-a-half (in 2024) years, a few of them sounded genuinely worried about it. But we all know that we should remain loyal to our constituents, work for them and then it makes no difference if we fight the next election with the BJP or on our own steam,” says the north Maharashtra MLA.

Echoing him, the third MLA says: “The fears are true, but we know how to deal with the BJP if push comes to shove. As of now, we are made for each other and we will continue to benefit mutually with Hindutva as our common brand of politics.”

Interestingly, despite this insecurity about the BJP among a section of Shinde MLAs, the feeling is that the BJP is still better than (NCP President) Sharad Pawar.

Says the two-time MLA, “I agree that the BJP did play dirty politics in 2014 and 2019 to undermine the Shiv Sena when we were in alliance with them and we did feel threatened by the BJP under Uddhav saheb; we still continue to harbour the same fear when we are with Shinde saheb now, but then the BJP is still much better than the Machiavellian Sharad Pawar.”