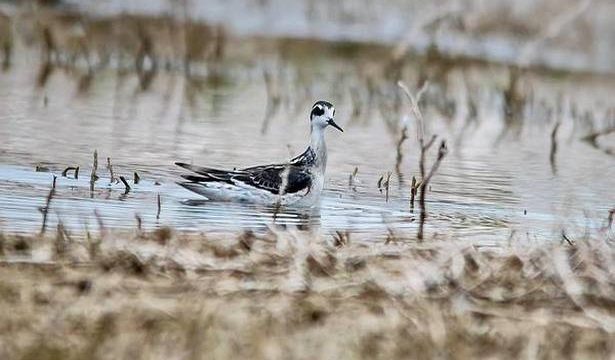 It is a migratory bird that breeds in the Arctic region

Birdwatchers recently spotted a red-necked phalarope (Phalaropus lobatus), a migratory bird that breeds in the Arctic region, at Uppar dam in Dharapuram, making it the first possible sighting of the bird in Tiruppur district.

Member of the Dharapuram Nature Society R. Magesh said on Monday that he and another member Sadhasivam Dhamu visited the Uppar dam on Saturday morning for birdwatching, when they spotted the lone red-necked phalarope.

The duo confirmed the bird’s identity by consulting other experts and through the eBird web portal, he said.

“It flew away shortly after we clicked its photograph and we could not find the bird on Saturday afternoon and on Sunday in the locality,” he said.

Red-necked phalaropes are waders that are usually found in a flock near shorelines during migration.

However, being spotted as a lone bird in a non-coastal area makes this a rare sighting, Mr. Magesh said.

Its neck turns red only during breeding season between March and June as part of its breeding plumage, he added.

“This could have been a passage migrant,” he said regarding the sighting at Uppar dam.

Passage migrants are those birds that stop over at a particular location for a brief period of time before leaving to their usual destination during migration.

Mr. Pavendhan, who was one of the three authors of the book ‘Birds of Coimbatore’, said that the red-necked phalarope was included as one of the 409 bird species in the book.