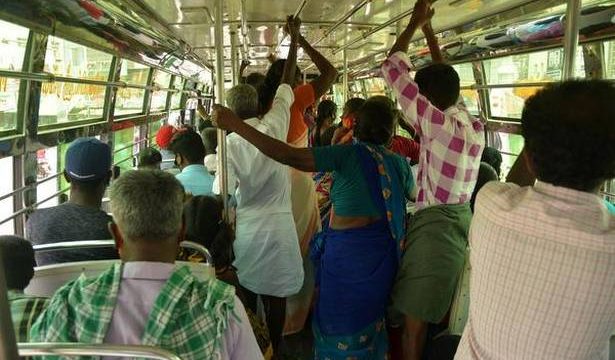 Daily collection goes down drastically due to scare among passengers

The restrictions reimposed by the State government to check the spread of COVID-19 came into force in Tiruchi and its suburbs on Saturday.

According to the Government Order issued a few days ago, restaurants, food courts and teashops can be operated only till 11 p.m., but only with 50% seating capacity. Cinemas and multiplexes will be permitted with 50% capacity following Standard Operating Procedures (SOP). Buses were allowed to operate only with passengers seated.

As per the G.O., most of the private and public buses began implementing the restrictions. The city buses, which were generally operated with many passengers standing, plied with seated passengers only. Most of the long-distance buses too were operated with the maximum number of permitted passengers. The time keepers at the Central Bus Stand ensured the departure of buses soon after the buses were filled with limited passengers.

Several bus workers said that the daily collection had gone down drastically in the last few days due to the scare among passengers on the spread of COVID-19 infection.

“We see just one-third of the crowd in the bus stand for the past three days. It seems that many people are afraid of going out since the COVID-19 cases began to increase exponentially,” said K. Kumar, 30, a conductor of a private bus plying between Tiruchi Junction and Chathiram Bus Stand.

R. Ranjith, conductor of a State-owned bus being plied between Tiruchi and Dindigul, said that going by the present trend of limited number of passengers, it was difficult to load passengers to the full capacity. The trend was likely to continue for a few weeks. Irrespective of the patronage, all passengers were sanitised. Bus crew had been asked to ensure the passengers wearing masks compulsorily.