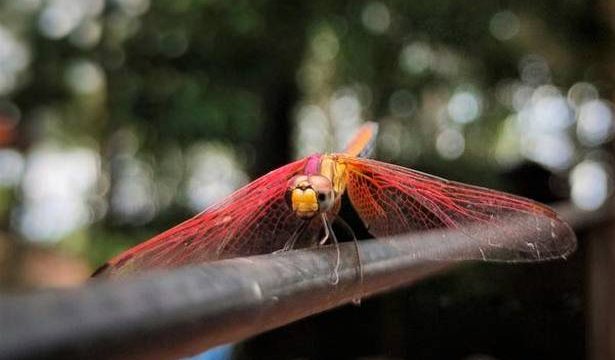 Specimen spotted by schoolboy from Palakkad on his house premises

A part male and part female dragonfly, sighted first by a class X student from his homestead at Changaleeri, Mannarkkad in Palakkad, has been recorded as the first case of gynandromorphism (the condition of an individual, especially an insect, showing some male and some female characteristics) in crimson marsh glider.

The peculiar dragonfly was first sighted by Ajay Krishna who was exploring his backyard during the lockdown in October 2020. A small pond is located 100 m from where the crimson marsh glider dragonfly was spotted first by Ajay and the Kunthi river flows about 600 m away.

The individual was studied in detail by researchers Subin K. Jose and Vivek Chandran of the Department of Geology and Environmental Science, Christ College, Irinjalakuda. The researchers and the young explorer teamed up with Swiss odonatologist Hansruedi Wildermuth and published the findings in the June edition of the international journal ‘Odonatologica.’

The sighted dragonfly was predominantly female, having the typical yellow colour in most parts except half of the right eye, parts of thorax and abdomen — which were crimson as in the male. Its eyes, thorax, legs, wings, and abdomen show ‘mosaic gynandromorphy’.

Gynandromorphs are chimeric individuals having both male and female tissues, and are viewed by the scientific community as a genetic aberration. Though common in some arthropod taxa such as Crustacea and Arachnida, it is very rare in Odonates.

Trithemis aurora is common, widespread and occurs around lakes, ponds, streams and wetlands. It is widely distributed and flies throughout the year, say the researchers. It is usually seen perched on dry twigs, aquatic plants and overhead cables near waterbodies.

In 2019, a gynandromorphic ruddy marsh skimmer (Crocothemis servilia) was sighted in the Kole wetlands of Thrissur but the individual could not be studied in detail.