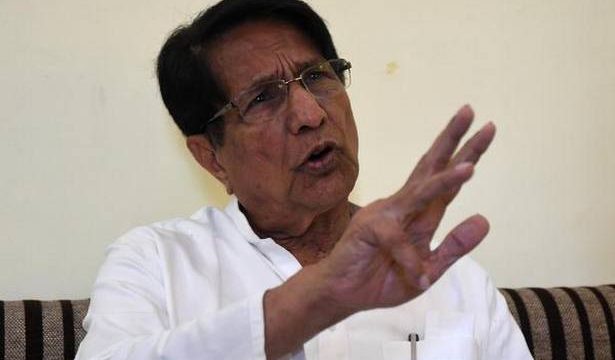 They were injured in a clash with the aides of Union Minister Sanjeev Balyan on Monday.

Rashtriya Lok Dal (RLD) president Ajit Singh reached Soram village in Muzaffarnagar on Tuesday to meet farmers who were injured in a clash with the aides of Union Minister Sanjeev Balyan on Monday. “I am not saying farmers are with me, I have come here to say that I am with you,” he said.

Addressing hundreds of farmers in the village, Mr. Singh demanded that FIR be registered against those who roughed up the farmers and entered their houses. “This is the least you could do. It is the law,” he told the officials present at the meeting. “You are to protect common people and not just the Minister and his aides,” he said.

The injured had submitted a complaint against Mr. Balyan and his aides in the Shahpaur Police station on Monday.

Mr. Singh said farmers were only asking questions about farm laws and raising slogans of farmers’ unity. “Why were they beaten up? What was the administration doing,” he asked. “When the farmers asked about the pending dues of sugarcane, the local MP got agitated. ‘Murdabad’ and ‘Zindabad’ are common slogans in political life. It doesn’t mean you will beat up farmers,” he said.

What happened on Monday was the doings of miscreants brought from outside, he charged and said, “the administration knows that we conduct panchayats of lakhs of farmers with utmost discipline.” Leaving the decision to hold the panchayat against the BJP to the villagers, he asked farmers to remain united. Earlier, BKU president Naresh Tikait said on Tuesday that those who were injured were farmers and not RLD workers.

On Monday night, Mr. Balyan told reporters that RLD workers used abusive language when he went to attend the final prayer meeting of a local leader. “RLD is trying to ruin brotherhood in the region. The elections are still a year away. Political opposition is welcome, but there is no point in disrupting the social fabric by creating ruckus during wedding functions and rituals of last rites,” he said.