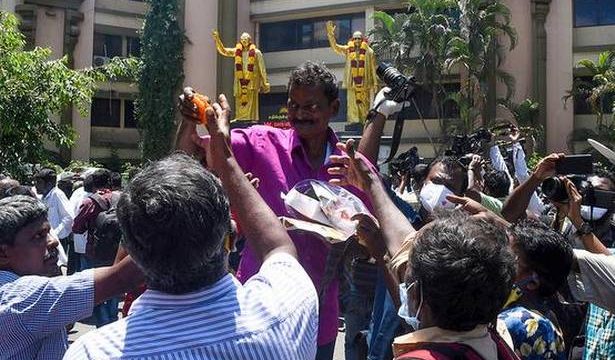 Inspector suspended for failure to control crowd at Anna Arivalayam

As the counting of votes polled in the Assembly election began across Tamil Nadu on Sunday, violation of the COVID-19 safety protocols became apparent at many counting centres.

Booth agents and party representatives flouted the norms of physical distancing and masking at almost all centres. Agents also crowded into the booths or in the dining areas.

Throwing party president M.K. Stalin’s request to the wind, DMK workers thronged Anna Arivalayam, the party headquarters, for celebrations and burst crackers. Only a few wore masks. By afternoon, an inspector attached to the Teynampet station was suspended for failure to control the crowd.

At many centres, hand sanitisers, PPE kits, masks and shields were provided, but very few used them diligently. At Anna University in Chennai, booth agents and party representatives crowded into the counting room.

With only one door left open in the counting room for the Saidapet constituency, party workers demanded that more windows and doors be kept open, which was later done.

People loitered around the centres without masking up. PPE kits were given before counting began. However, within a few minutes of donning them, agents at most centres discarded them, citing the heat.

At the counting centre for Alandur, Sriperumbudur, Uthiramerur and Kancheepuram, officials frequently advised the booth agents to wear masks and face shields and maintain physical distance, but their pleas were largely ignored.

In Tiruppur, hundreds of agents gathered in individual counting rooms for the eight Assembly constituencies in the district, at the dining place for their breakfast and lunch and outside the media centre to watch the live television news. Although 16 tables were arranged for each constituency with adequate space between them, the agents gathered in the space allocated for them in the counting rooms with scant regard for distancing norms.

While officials said two PPE kits were provided per table for the agents, many wore them improperly. Compliance with mask-wearing was relatively high. But the advisory to wear face shields, along with the masks, was not followed.

Very few used sanitisers made available at vantage points. Officials at the counting centre in Pudukottai did not appear to insist on the COVID-19-negative certificate or the vaccination certificate from the agents or media persons. Some police personnel wore masks on their chins and others put them in their pockets. “It is too hot. We are standing outside the centres, where there is no fan. The heat is unbearable and the mask makes breathing difficult,” said a policeman posted outside a centre.

In the dining areas, people rushed to ply food onto their plates with little regard for personal distancing.

Chennai police commissioner Mahesh Kumar Aggarwal suspended the Teynampet inspector on the order of the Election Commission of India (ECI) for failure to ensure compliance with its instructions. The ECI had written to the Chief Secretaries of all the States and the Union Territories, which went to the polls, to prohibit victory celebrations in view of COVID-19. It had directed that the station house officers and others concerned be suspended immediately and criminal and disciplinary action initiated against them for failure to control crowds.

At noon, DMK workers burst crackers at the party headquarters and on Anna Salai as the results came in. They were dancing without wearing masks and maintaining physical distance.

In a communication to the Chief Electoral Officer, Mr. Aggarwal said a team, led by A. Murali, Inspector of Police, Teynampet station, T. Nagar district, rushed to Anna Arivalayam and halted the bursting of crackers and other celebrations. A first information report was filed. The DMK workers were asked not to burst crackers or celebrate as directed by the ECI. They were also warned and asked not to throng the party headquarters and other places in view of the pandemic. Mr. Murali has been placed under suspension for his lackadaisical attitude and dereliction of duty and failure to ensure compliance with the ECI’s instructions, the order said.

(With inputs from bureaus)