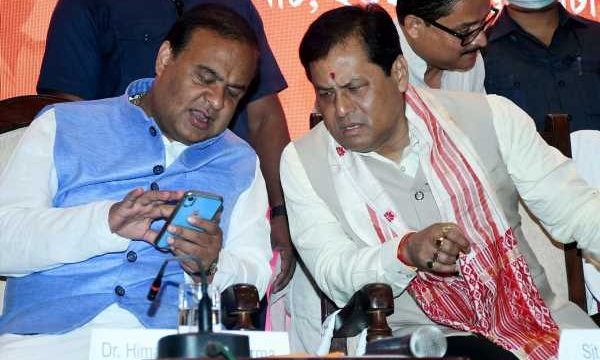 Although there was no doubt that the ruling Bharatiya Janata Party-led alliance in Assam will form the government, there was little clarity about the next chief minister in the state, with Finance Minister Himanta Biswa Sarma adding to the mystery by declaring only that the next CM would be from the BJP, without naming Sarbananda Sonowal, the CM of the outgoing government.

The BJP, which fought the election in alliance with the Assam Gana Parishad and the United People’s Party Liberal, had originally claimed it would win 100 seats. But the BJP chief in the state, Ranjeet Das, claimed hours before the result that the BJP would win 83 seats.

The party could fall short of this figure as it is currently well ahead in 78 of the state’s 126 assembly constituencies. The Opposition Grand Alliance, spearheaded by the Congress, is ahead in 45 constituencies, but has given up hope of forming a government.

The Congress, which had hopes of forming the government, had invested a lot in the election. It overrode the claims of its own party to ally with the All India United Democratic Front led by Badruddin Ajmal, for the first time.

Muslims are a sizeable majority in 40 of Assam’s 126 seats. Only in his last days had Tarun Gogoi begun to review the AIUDF’s political utility, before that, taking a position that any alliance with the party would mean marginalising the Congress’s own base.

“It was an existential choice: We could have divided the votes in Muslim majority areas and allowed the BJP to win; or swallowed our pride and done a deal (with the AIUDF),” said a top Congress leader.

In addition, the Congress had an alliance with the Left parties and the Tejashwi Yadav-led Rashtriya Janata Dal that was expected to make inroads into the Bihar migrants in Assam.

Against this backdrop, Union Minister Jitendra Singh on Sunday said the assembly poll had broken the ‘jinx’ that minorities do not vote for the saffron party as it has received huge support in the Muslim dominated areas and constituencies.

Singh hoped that in the second term of governance, Assam will, along with the entire north eastern region, emerge as a leading player in the post-Covid economy and growth for not only the northeast but of the whole of India.

The BJP government will have the task of Covid management. But it will also have to put the state back on the rails after the damage the pandemic has done to its economy.

Covid has had an impact on millions of workers associated with the 850 big tea gardens in Assam. Complicated labour laws were not helping.