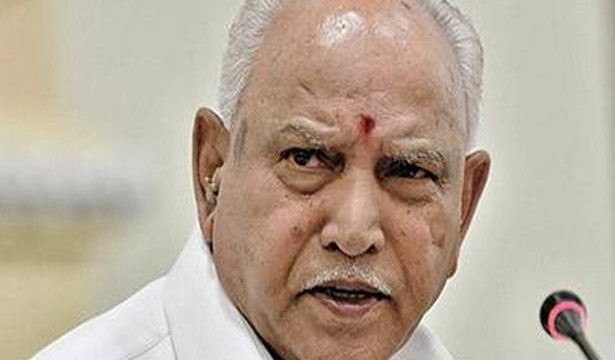 The petitioner alleged that a housing project proposal on 26 acres in Bengaluru was devised and suddenly withdrawn in 2011 to make ‘illegal monetary gain’.

The Supreme Court on Monday stayed a Karnataka High Court order restoring a corruption complaint filed by a private investor against Chief Minister B.S. Yediyurappa in connection with a housing project proposal for middle and low income groups on 26 acres in Bengaluru.

In January, the Supreme Court had protected Mr. Yediyurappa from arrest on the basis of the complaint by A. Alam Pasha, alleging that the project was devised and suddenly withdrawn in 2011 to make “illegal monetary gain”.

Mr. Pasha’s infrastructure development company had applied for the ₹600 crore project before it was withdrawn.

In January, Mr. Yediyurappa had raised the question of law as to whether “a court can proceed under Prevention of Corruption Act against a public servant without prior sanction on the ground that he had allegedly demitted office which he was alleged to have abused”.

On January 5, 2021, the High Court had restored the complaint filed by Mr. Pasha on the ground that “no sanction for prosecution under the Prevention of Corruption Act is necessary after demitting office or retirement of the public servant”. The High Court had ordered the case to be proceeded in accordance with law.

The table of events began in April 2012 when Mr. Pasha, who is the managing director of Pash Space International Pvt. Ltd., filed a complaint with the Bengaluru Lokayukta accusing Mr. Yediyurappa, former State Industries Minister Murugesh R. Nirani and other senior officials of corruption.

He alleged that a project proposal to build and establish ‘value homes for the middle and low income group’, generating employment to 500 people, was approved by the Yediyurappa government via a notification in July 2010. Twentysix acres at Devanahalli Industrial Area in Bengaluru rural district was allotted for the project. Mr. Pasha’s company had applied for the project.

However, the plug was pulled on the project in January 2011. Mr. Pasha claimed it was done with an alleged intention to divert the project to some other firm in order to have an illegal monetary gain.

Mr. Pasha also alleged that a letter with his signature was forged to show that his company was not interested in the project. Mr. Pasha said no such letter was rendered by his company.

Further, the complaint alleged that the 26 acres was carved out of 4,500 acres in the Hardware Park, IT Park and Aerospace at Devanahalli Industrial Area. The original owners were ignored and ineligible claimants were paid during the acquisition.

Subsequently, the Special Judge had ordered an investigation by the Lokayukta in May 2012. In June 2013, the Special Judge took cognisance of the chargesheet and registered a case of corruption and issued summons to Mr. Yediyurappa and the others.

In October 2013, the High Court quashed the case for lack of previous sanction for prosecution of public servants.

Two months later, in December 2012, Mr. Pasha had filed another complaint on the same allegations. This time the Special Judge dismissed the complaint for lack of prior sanction. Following this, Mr. Pasha had moved the High Court against the dismissal to win a favourable order on January 5 this year.