Senior Congress leader Jyotiraditya Scindia on Monday dismissed speculation about his Twitter bio not including his links to the party as “baseless”.

“I had changed it (the Twitter bio) a month ago… I got feedback that it is a long biodata and should be made short. All rumours around it are baseless,” Scindia said.

The buzz started after it was highlighted on social media that his Twitter bio just read “public servant, cricket enthusiast”.

In July, posters had emerged outside the Congress’ party office in Bhopal appealing to Rahul Gandhi to appoint Scindia as the next party president.

The appeal was made on the behalf of all Madhya Pradesh Congress Committee workers.

The banners came after Scindia had resigned from the post of Congress’ general secretary for West Uttar Pradesh after the party put up a poor show in this year’s Lok Sabha elections.

In September, hoardings requesting Congress interim president Sonia Gandhi to “not to come under anyone’s pressure” and appoint Scindia as Madhya Pradesh Congress chief had surfaced in Gwalior.

Notably, Scindia had also backed the Centre’s decision to abrogate Article 370 in Jammu and Kashmir, taking a stand in contrast to that of his party’s.

Last month, Scindia said that Congress needs to self-introspect, echoing the sentiments of his fellow Congressman Salman Khurshid who had expressed concerns over the party’s future.

Scindia had lost from the Guna parliamentary constituency in Madhya Pradesh, his family stronghold, to BJP’s Krishna Pal Singh Yadav in this year’s general elections.

With inputs from ANI 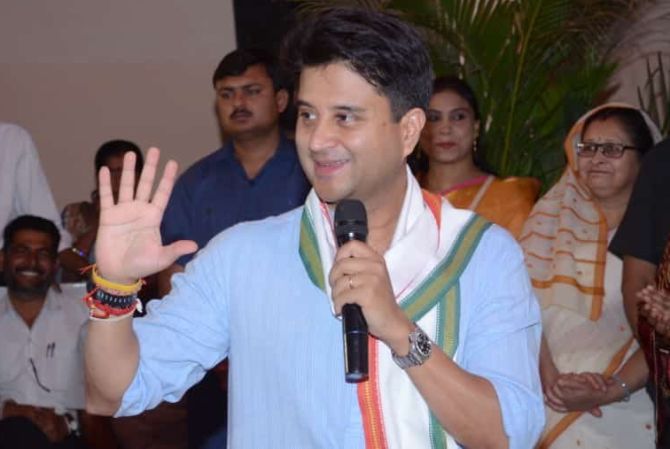