Delhi CM vs L-G: The Centre Friday said it would be against the law to take a final view on the Services matter since it was still pending before the top court.

Hours after Delhi Chief Minister Arvind Kejriwal alleged that the Union government and the Lt Governor were violating the Supreme Court order by refusing to hand control of the Services department to his government, the Centre Friday said it would be against the law to take a final view on the Services matter since it was still pending before the top court.

Lt Governor Anil Baijal too made it clear that he would retain control of the Services department unless the regular bench of the Supreme Court rules on the 2015 notification of the Ministry of Home Affairs (MHA) that authorised him to decide on transfers and postings of bureaucrats in the Delhi government. 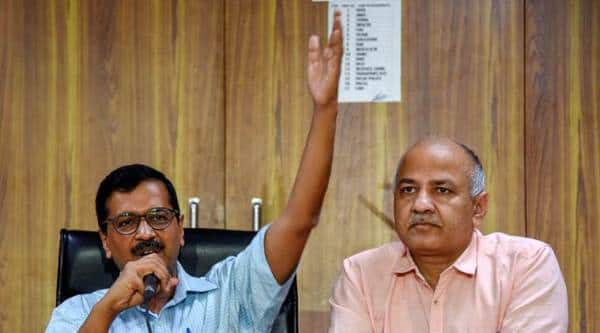 A spokesperson for the MHA, responding to Kejriwal’s allegation, said: “The MHA has not advised L-G to ignore any part of SC order. This is a misleading statement. The MHA has only advised the L-G, based on a reference received from him, to follow the law.”

“This advice is based on Ministry of Law’s opinion that the Constitution Bench has clearly ordered that the matter be placed before the appropriate regular Bench. In fact, it would be against the law to take a final continued view on matter related to Services which is still pending before the regular Bench. This is also in accordance with the Proviso to Article 145(3) of the Constitution,” the spokesperson said.

Baijal too conveyed his position to Kejriwal and Deputy Chief Minister Manish Sisodia when they went to meet him at Raj Niwas. “Hon’ble L-G informed that in the wake of the judgment of the learned Constitution Bench of Hon’ble Supreme Court, the Ministry of Home Affairs, Government of India has advised that as per concluding paras of judgment, the nine appeals, including the one relating to ‘Services’, shall be taken up by the learned regular Bench and the MHA notification dated 21.05.2015 continue to be valid,” the L-G’s statement said.

Baijal also told Kejriwal that the entire judgment and its implications were “still being studied”. He said further clarity will be achieved when the appeals pending before the regular bench are disposed. Incidentally, referring to the judgment, Baijal sought to remind Kejriwal that under the Constitution, there is “no room for absolutism and anarchy” — in what appeared to be a veiled reference to the sit-in at the Raj Niwas last month by the CM and his ministers.

“The L-G observed that so far as the proposals or matters within the legislative competence of the Legislative Assembly of Delhi are concerned, Supreme Court has laid down that the concurrence of Lt- Governor is not required on decisions of Council of Ministers, but at the same time the Lt-Governor shall be kept informed. The said communication is imperative so as to keep the Lt-Governor apprised in order to enable him to exercise the power conferred under Article 239AA (4) and the proviso thereof,” the L-G statement said.

Assuring the CM of his “support and cooperation”, Baijal said the judgment has laid down the underlying principles to be followed by Constitutional functionaries while taking decisions. “The Hon’ble Court has held that the NCT of Delhi does not have the status of the ‘State’ under the present Constitutional scheme,” the statement said.