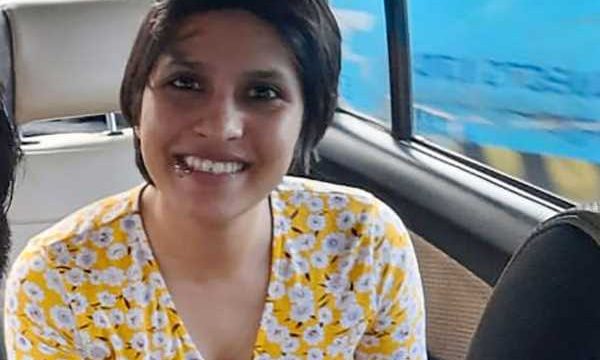 It was in November 2020 that Shraddha Walkar first confided about the physical assault from Aaftab Amin Poonawala, recalls a former colleague, adding that she was about to approach the police but stopped short of pressing charges after Aaftab’s parents intervened.

Karan, who worked with Walker in Mumbai till March 2021, remembers her as a ‘lively and energetic person’.

His chats with Walkar about the assault are doing the rounds on social media.

Talking to PTI in a Zoom interview, he says she was usually very energetic and full of enthusiasm in office, ‘but on some days when she had fights with Aaftab, she isolated herself so that she does not have to lie. I cannot imagine Aftab going to this extent…’

Poonawala allegedly strangled Walkar, 27, on May 18 and sawed her body into 35 pieces which he kept in a 300-litre fridge for almost three weeks at his residence in South Delhi’s Mehrauli before dumping them across the city over several days past midnight.

Demanding justice for Walkar, Karan, who insisted to go by his first name, says he is ready to co-operate with the police in whatever way he can.

The WhatsApp chats between Karan and Walkar have revealed a pattern of abuse when the victim lived with Poonawala in their hometown Vasai near Mumbai.

Similarly, pictures of Walkar dating back to 2020 with visible injury marks also surfaced on social media.

“Those chats are from November 2020 and that was the first time when she opened up about the domestic violence and the beatings that she was going through in her relationship with Aaftab,” he says.

Recollecting how she had sent him a picture in which a black mark under her right eye and neck bruises were visible, Karan says he does not have that picture now.

All that is left with him are the chats and a medical report that Walker had shared with him in December when she had to seek treatment for her injured spine and neck due to the beating by Poonawala.

Hearing about the abuse, did he counsel her to move out of the volatile relationship?

Karan says, “When she started working with me, she never told me about it (domestic violence)… It was only in November (2020) when she was badly hurt and could not trust anyone that she talked about it…”

Walkar had sent a distress message and asked for help, he says, adding that he had then called his friend Godvin, a resident of Vasai, who took her to the police station and the hospital.

“This was the first time she sought help. I also spoke to her about what had happened in the past and made sure she did not fall prey to the vicious cycle of suffering. But she was very happy after that because she was guaranteed by Aaftab’s parents that he would move out of the house,” Karan adds.

He says he did not know that Walkar and Poonawala had reconciled and had even started staying together.

It was in March 2021 that Walkar left the firm where she was working with Karan.

“It was her last day at work and that was the day we spent the maximum time together. We had kept a farewell for her. She dropped me home and then went to her residence. That was my last meeting with her,” says Karan.

He says he lost touch with her after that, but all those memories of her sharing her ordeal with him came flooding back when he heard about what happened to Walker.

“I never expected to hear such a news… I could not speak to anyone at home. It took me time to come out of that shock… It was quite heartbreaking,” he says.

The Delhi Police had on Friday sent teams to Maharasthra, Haryana and Himachal Pradesh to hunt for evidence in the case with sleuths recovering some body parts in Gurugram even as a court here ordered that narco test be conducted on the accused within five days.

According to police officials, after leaving Mumbai, Walkar and Poonawala had travelled to several locations and police are visiting these places to ascertain whether something had happened on those trips to trigger the murder.