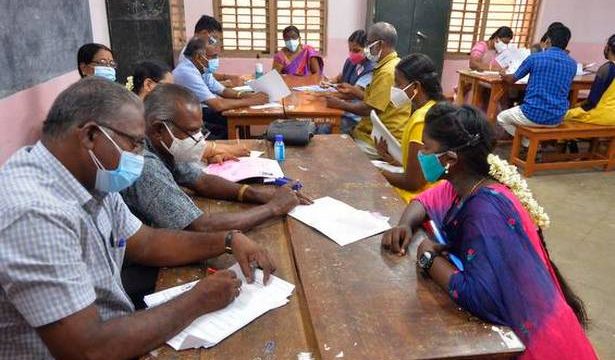 The Education Department has received more applications than it has seats available; loss of livelihoods due to the pandemic is one major factor in parents turning to government schools

There has been a substantial increase in the number of students applying for class 11 (plus one) admissions at government schools in Puducherry during the current academic year. In fact, the Education Department is struggling to admit all those who have applied, as the number of applicants has exceeded the total number of seats available.

Data available with the Department revealed that as many as 9,361 students applied against 7,115 seats available in higher education schools. “We are certainly seeing a spike in the number of students applying for plus one in government schools. It is a very encouraging sign as it will have multiple impacts. We have already added 200 seats and are exploring possibility of adding seats wherever space is available and demand exists,” P. T Rudra Goud, Director, School Education, told The Hindu.

There are various reasons for the sudden interest shown by parents in sending their wards to government schools. “The economic hardship sustained due to long days of the lockdown and the overall impact of COVID-19 on the economy is certainly a reason for parents to seek admission for their children in government schools. It is also a fact that the quality of education in several government schools has improved in the last few years,” Mr. Goud added.

Principal of Thiruvalluvar school, N. Dinakar said there has been tremendous demand for Plus One seats. Many students have come from private schools, he added. Feedback from parents about the interest shown in government schools revealed that many parents had lost their livelihoods due to the pandemic. Education is also a recurring expenditure like buying of books and other accessories. In government schools everything is free, he added.

Some parents have also put their wards in government schools with the hope that the administration would implement 10 per cent reservation for government school students in private medical colleges. The decision of the government had a huge impact towards the approach of parents to government school, Mr Dinakar said

Officials in the Education Department said private schools are also facing resource crunches and are working with limited staff. They are also limiting their admissions as uncertainty prevails about the spread of the virus and its impact on the economy.