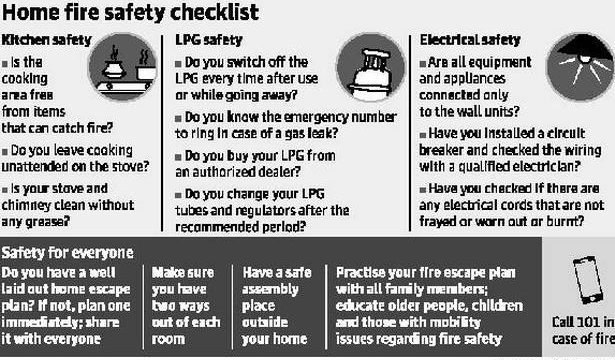 The horrific fire accident in an apartment complex in Devarachikkanahalli has underscored the importance of fire safety, especially in highrises and multistorey buildings. Over the years, the number of apartments in the city has increased exponentially. It is, therefore, important to ensure compliance to fire safety norms.

To create more awareness about the same, more than a year ago, the Bangalore Apartments’ Federation (BAF) and Beyond Carlton, an organisation working on fire safety, together launched a pilot to assess the fire safety measures in place in various apartments. Around 90 apartments in the city reportedly participated in the self-assessment.

Uday Vijayan from Beyond Carlton said the objective of the pilot was mainly to create awareness among citizens and sensitise them about what to do in case of a fire.

“Most people are apathetic to fire safety; it is a behavioural issue that needs to change. The pilot was mainly a checklist of all the measures that need to be in place, such functioning valves, conducting regular fire drills, having evacuation plans etc.,” he said.

BAF vice president Shankar Swaminathan admitted that there was a need for more engagement with apartments on the issue. BAF, he said, hoped to scale up the pilot to bring in better awareness. “We had to motivate the apartments to participate in the pilot, as not many came forward when we launched it,” he said.

Vikram Rai, general secretary, BAF, told The Hindu that as per rules, high rises, including apartments, that are higher than 15 metres are required to get fire clearance certificate every two years from the Fire and Emergency Services. However, the shortage of manpower for this in the department is a major issue. The department had in fact a couple of years ago had recommended to the Home Department to have empanelled professional agencies to assist the department for the fire audit of high rises in the city.

Amar Kumar Pandey, Director-General of Police, Karnataka State Fire and Emergency Services, said that the fire audit was an on-going process and that fire personnel were auditing many high rises across the city.