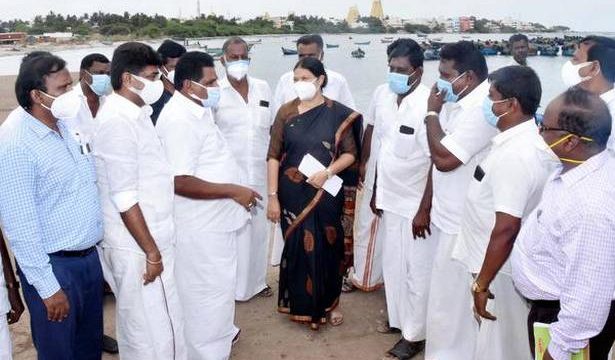 The demands of the fishermen community here would be looked into with the objective of not only giving relief, but finding permanent solutions wherever possible, assured TN Animal Husbandry and Fisheries Minister Anita Radhakrishnan here on Friday.

Speaking to reporters, he said that the Ministers and officials have been directed to understand problems, inspect and interact with stakeholders. He said that the fishermen have demanded a fair pricing for their catch.

On most occasions, the middlemen made money and the fishermen got paltry sums and this disparity would definitely be wiped off, he said.

From the infrastructure point of view, the fishermen have demanded a storage facility. Currently, they were forced to sell at a price fixed by the exporters. They have also asked for a fish landing centre at Rameswaram on the lines of the one at Kundukal. A detailed study would be made on the financial aspects and the implementation methodology, the Minister said.

On the need to enhance financial assistance to the fishermen during the annual ban period, he said that it would be considered after discussing the same with the Chief Minister.

The Minister said that the Ramanathapuram MLA Kadarbasha Muthuramalingam has made a representation for establishing a Fisheries College here. It will also be considered on a positive note. On the issues relating to fishermen being humiliated by the Sri Lankan Navy, he said that the CM was aware of the problem and he would take it up with the Union government.

The Minister also visited Potthithatti village, near Paramakudi in the district, wherein the Department of Animal Husbandry officials had organised a mega camp for milch animals.

According to a press release, 150 milch animals and other cattle were screened by the veterinarians.