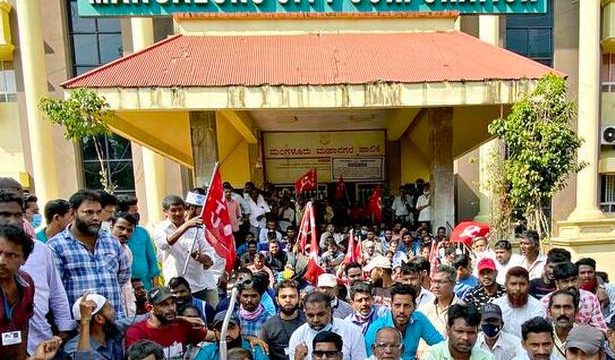 Several street vendors staged a snap protest outside the Mangaluru City Corporation headquarters on Wednesday to condemn the recent action of the corporation to evict street vendors from different parts of the city.

More than 200 street vendors marched from Ballalbagh Circle to the MCC and carried out the protest.

Addressing the protestors, Street Vendors Welfare Association honorary president B.K. Imtiyaz said that Corporation Commissioner Akshy Sridhar unilaterally decided to go ahead with eviction of street vendors in several parts of the city by keeping in dark the Town Vending Committee, which comprises representatives of street vendors and officials. Mr. Imtiyaz said that several street vendors, who have been severely affected due to COVID-19 restrictions, were unceremoniously evicted last week from Hampankatta, Kadri and other parts of the city. Accusing officials of selectively evicting street vendors, he said that officials seized material from the vendors. Vendors who suffered included those who had identity cards.

Denying the charge, Mr. Sridhar said tha the eviction drive was carried out after a discussion in the committee. The corporation took action against only those street vendors who did have identity cards. Street vendors, who were operating causing hindrance to traffic movement, were also evicted. Mr. Sridhar said that he will inquire into the allegation that vendors with identity cards were evicted.