The Shanti Swarup Bhatnagar Award in 2013.

Some of the major awards Suman Chakraborty, a professor at the Indian Institute of Technology-Kharagpur, has won.

But none of these awards can match what he has been doing for rural healthcare through his research.

“What we are doing is not even 10% of what is needed. We have only introduced the technology; it has to be a part of the healthcare system and not present in an isolated manner here and there. It has to be a national movement,” Professor Chakraborty tells Rediff.com‘s Shobha Warrier

Your research has been on developing devices that would help rural healthcare. Is there any particular incident that caught your attention to this often neglected area?

If you look at the journey of any researcher, you will see there are certain things which happen by chance, rather without much planning.

You develop certain insights from experience and that direct you to one particular direction. That is the case with me too.

I worked on micro fluidics and its applications on healthcare, but not particularly focusing on rural healthcare.

Though IIT-Kharagpur where I work has a township, it is basically located in a rural area.

There is a railway station here and if you go beyond the railway station, the scenario is totally different. It is like any other rural area you see in India.

It is difficult not to notice the huge contrast and difference between the kind of facilities and access to facilities we have at IIT and a place that is just a kilometre away from IIT.

People there do not have either affordability or accessibility to healthcare, or a combination of these two.

It was a disturbing scenario…

Definitely. It still is disturbing.

The focus of our work has always been on medical diagnostics, but when I noticed this disturbing disparity, we shifted our focus to the under-served sections of our society. That means, the technologies we use now can be used in the field and not in labs where you have air-conditioning, refrigeration and high-end machines.

Yes, we could solve it in such a way that it is better than what it was earlier.

If you look at the technological developments in healthcare, they are done with the assumption that everybody can afford it.

You have these high-end labs and diagnostic centres manned by qualified technicians and doctors in big hospitals which are not accessible to everyone. Even if they are accessible, not many can afford them.

Reports say 80% of doctors in India work in urban areas. Do you think technology alone can solve a lot of healthcare deficiencies in rural areas?

Technology alone cannot solve the problem entirely, but most of it.

Does that mean you were simplifying the technology so that they can use it in the rural areas?

So, what we were developing had to be simple yet accurate and also cost-effective.

Initially, you cannot go for simplification of technology as as you may miss some scientific components.

It is a two-step process for us. First, we develop the technology in the lab so that we will know the nitty-gritties of the technology. Then, we move on to simplifying it.

Can you give us an example? For example, you have developed a device to check the haemoglobin level of individuals in the field and not in the lab…

There is a classical test used in all the labs which can be manual, semi-automated or fully automated.

We use just one drop of blood from the finger onto to a strip of paper and get the result within a minute.

The amount of reagent we use also is very less, thus reducing the cost.

What we do is, design the paper in such a way that the same principle we use in labs works on the paper too, that is the same chemistry and same reaction.

Is it an ordinary paper?

It’s a filter paper. When you compare the results of the test done on the paper and also in a lab, you will see that the results are more or less the same.

Is it for the initial diagnosis that these kits are used?

You can treat it as good as any standard lab test.

The next step after the test is, take a picture of the colour of the blood to check the level of haemoglobin.

For that, we keep the strip in a box, and with the help of a smart phone camera, the picture of the image is taken. Then the analysis of the colour of the blood is done by the app that is formatted in the phone.

The image analysis and interpretation is done automatically by the phone and the person taking the test doesn’t have to do anything.

Remember we do not expect the person, taking the test, for example as Asha worker to know anything about the technology.

When the result comes on the app interface, it will be accessible to any doctor who is sitting in a big city. Like you said, 80% of the doctors are located in the urban areas.

After looking into the test result and the patient’s history, the doctor can immediately give the first level of recommendation.

For example, if the haemoglobin level is extremely low, and the patient requires an immediate blood transfusion, the caregiver can take him to a place where the patient can be administered blood.

If it is only mild anaemia, the doctor may prescribe medicine or dietary changes. 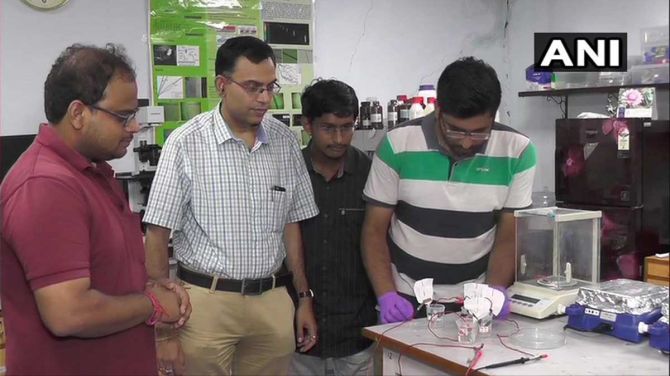 Was this the first device you developed?

The first one was to test the glucose level in the blood. The glucometer that is generally used by people is quite expensive for a person living in the rural area.

We also developed another device to check the creatinine level as kidney is the first organ that gets affected by uncontrolled diabetes.

Then, we have a device to check the lipid profile.

We have this belief that only people in the urban areas suffer from high cholesterol. No, those in the rural areas also are affected.

The diseases which we previously thought to be associated with urbanisation are there in the rural areas also because of the life style changes.

The idea behind all our inventions are, there is a need for early detection of diseases.

Do you use the same paper strip for all the tests, for example for haemoglobin, creatinine and glucose?

The paper is the same but we use different reagents for different tests.

Can we say almost all the common diseases are tackled at the preliminary stage through your devices?

Yes, you can say that. We have devices for these basic tests. Then we also have devices to diagnose infectious diseases like flu with which we can diagnose TB also which is a major disease in rural India.

We use molecular diagnostics for infectious diseases which is one of the most difficult diagnostic technologies. But we have created a portable device which is an alternative to the RT-PCR machine. This machine we developed during the covid time is named COVIRAP.

This machine is a 1ft x 1ft x 1ft box and it can perform the test like an RT-PCR machine, and the test results can be known within 40-45 minutes.

Though we developed it for covid tests during the covid period, subsequently we use it influenza test. Now, we use it to detect TB.

The advantage is, you can use the same device to do different tests by using different strips of paper with different reagents.

You have also developed a device to detect oral cancer…

If you notice, the device we spoke about earlier require body fluids to test.

The device we developed to detect oral cancer does not require any body fluid; it is done through imaging.

Though there are several reasons for oral cancer, majority of the patients are tobacco or gutka users, and they belong to the group who do not have access to early detection or care.

If detected early, any ulceration in the mouth can be prevented from becoming cancer by changing their lifestyle. A large number of people could be saved if it is detected early.

What we have developed is a device which looks like a torch with a thermal camera with which we can take the picture of any ulceration inside the mouth.

The image we grab from inside the mouth is temperature at different points. The algorithm we have developed will convert the temperature into showing the blood flow in the area.

You have used AI (Artificial Intelligence) in all your devices. How important is AI in developing devices like these?

AI is very important particularly in the healthcare space as there is a lot of difference between one person to another.

Every human being is different. Health issues are also very personalised and you see variations in every person.

In the normal conditions itself, even the physical appearance of say, the inside of the mouth of one person is different from another person.

With the help of AI, we can predict the individual variations more accurately.

Do you consider what you are doing as part of your responsibility towards society?

What we are doing is not even 10% of what is needed. We have only introduced the technology; it has to be a part of the healthcare system and not present in an isolated manner here and there.

And it cannot be done by the efforts of one or two individuals; it has to be a national movement and part of the entire system.