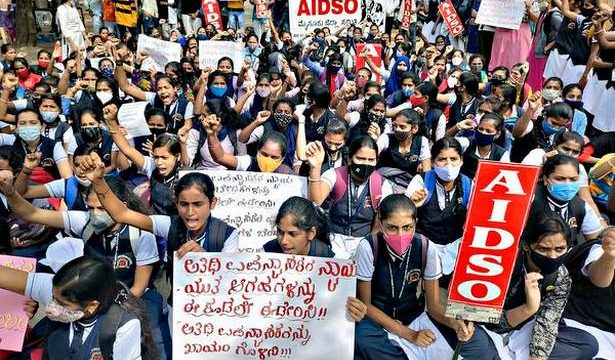 Support is pouring in for guest lecturers of degree colleges who are on indefinite agitation across the State in support of their demands.

On Tuesday, the Mysuru unit of All India Democratic Students’ Organisation (AIDSO) extended its support to the guest lecturers in Mysuru as they have continued to strike since the last many days seeking justice from the State Government. The lecturers are boycotting classes and staging demonstrations seeking job security.

AIDSO, in its letter to the Minister for Higher Education, said the guest lecturers are in distress and struggling with uncertainty over their jobs and salaries. Many of them are working as guest lecturers in colleges for the last 10-15 years and many are highly qualified with doctoral degrees and cleared NET, which gives them eligibility to become assistant professors in degree colleges and universities.

“It is a matter of great disappointment that despite their continued services as guest lecturers, they are not assured of job security and timely salaries and the Government has failed to safeguard their interests,” AIDSO said in its letter.

The Government has failed to respond to their demands in spite of their protest for many days. These lecturers have been playing an important role in shaping the future of the students. “As students, we have come in support of the lecturers by extending moral support to them,” the protesting students said.

AIDSO urged the Government to speak to the lecturers as their strike has disrupted physical classes in colleges. “The Government must consider their demands,” it urged.

The Aam Aadmi Party (AAP) in Mysuru said their services should be regularised giving them job security as in Delhi since their demands are legitimate. “Several associations have expressed their support but in spite of the guest lecturers protesting all over the State, the Government and Higher Education Minister ignoring them is unfortunate,” Malavika Gubbivani, president, AAP, Mysuru said.

Education sector has the least priority in this government and teachers’ issues are invisible and I wonder why the higher education minister is not eager to solve the guest teachers’ problems. AAP supports the demands of the guest lecturers and urges for early resolve of the issue, she said.

Even though their demands are legitimate the government has deliberately turned blind, she alleged.