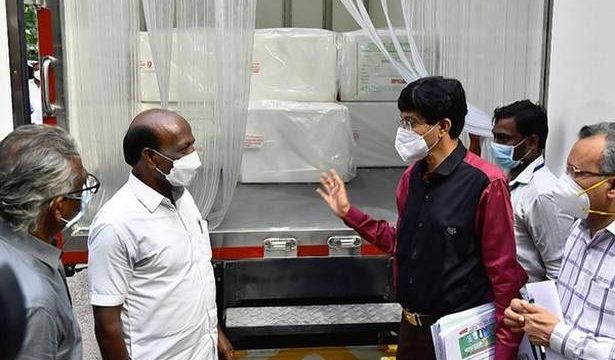 Prior to the arrival of the consignment, Minister for Medical and Family Welfare Ma. Subramanian told reporters that the State had received 1,02,49,000 doses of vaccines so far, of which 97,65,000 had been administered.

“The present stock position is 85,000 doses. This was distributed to the districts on Thursday,” he said.

With the additional doses reaching the State Vaccine Store, the vaccines will be distributed to all districts. “A schedule for distribution has been readied. When the vaccines reach the districts and are administered, the number of people inoculated in the State will cross a crore,” he said.

The 3.65 lakh doses of Covishield are part of the State government supply.

Health Secretary J. Radhakrishnan said the initial hesitancy and fear of taking COVID-19 vaccines no longer existed among people, and many were coming forward to get immunised now. The same enthusiasm was not seen in January, he said.

“Vaccination is the main means to prevent the third wave of COVID-19It is important to fully utilise the programme,” he said.

The Minister said 1,299 people had so far been affected with mucormycosis in the State.

“The task force on mucormycosis is readying a report on treatment protocols and drugs to be used and it will be submitted to the Chief Minister in two days,” he said.