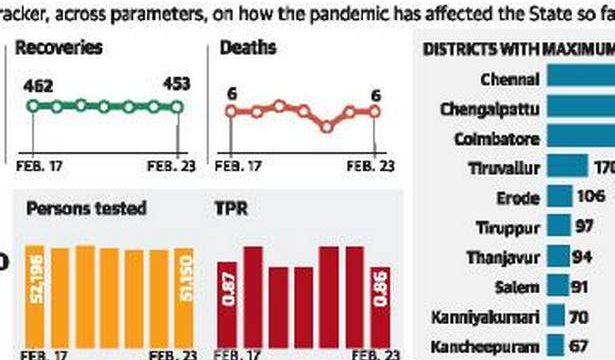 Another 442 fresh cases of COVID-19 were identified in the past 24 hours in the State. As on date 4,074 people are undergoing treatment for the infection. Till date, as many as 8,49,166 people have been infected. At the same time, in a day 453 people were discharged from various health facilities, taking the tally of those cured to 8,32,620.

The State also registered six deaths. With this, 12,472 people have died of the infection, according to the daily bulletin of the Director of Public Health.

Of the 2,584 passengers who returned from the United Kingdom between January 8 and February 23, as many as 2,025 had been traced and tested.

The details of the passengers include cross notification from/to other States. The Health Department is tracing other passengers as well.

So far, the State has identified 36 primary cases and 20 others who were in contact with them.

Of this, six primary cases tested positive and were in a separate isolation ward.

The rest of them tested negative on follow-up RT-PCR and had been discharged but are under home quarantine.

Out of 56 RT-PCR positive patients sent for whole genome sequencing till date, 11 people were positive and 28 negative. The results of 17 others were awaited.

In Chennai district, another 148 people tested positive in the past several hours and 113 more were discharged post-treatment.

As on date, 1,700 people are under treatment in various health facilities. No deaths were recorded in the district, however.

While Perambalur and Kallakurichi did not record any fresh case, nine districts recorded cases in double digits.

Three of the six deaths in the last 24 hours were recorded in government hospitals.

While five of the deaths were due to pre-existing co-morbid conditions, one person died due to complications arising from the infection.

A 51-year-old man from Tiruvallur, who had been admitted to a private hospital in the city on February 16, tested positive the next day for COVID-19.

He had been admitted with complaints of fever and cough for five days and loss of appetite for three days. He died on Monday evening due to COVID-19 pneumonia, as per the records.

Meanwhile, as many as 15,332 people were vaccinated on Tuesday. Of this 9,967 beneficiaries received the first dose and 5,365 the second dose.

Among them were 11,249 healthcare workers and 2,242 frontline workers, other than the police.

A total of 1,793 police personnel and 41 RPF staff were administered the vaccine. Seven staff on election duty were also inoculated.

Till date, 4,00,698 people – healthcare workers, frontline workers, police and election staff – had been administered the vaccine in the State.

Over 3.18 lakh healthcare workers, who handle patients, had been inoculated. The number of frontline workers who took the jab was 48,349.

A total of 34,003 police personnel and 133 RPF beneficiaries had been given the shots so far. As on date, 34 election staff had also been administered the vaccine.

Among them, 3,59,607 people received the first dose of the vaccine while 41,091 persons received the second dose.