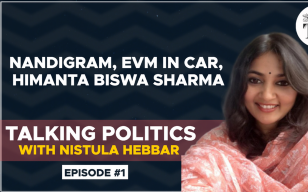 In today’s episode of Talking Politics with Nistula Hebbar, we discuss the top political stories of the week: the fierce battle in Nandigram, the runaway EVM machine and the campaign gag on BJP’s Himanta Biswa Sharma.

In Nandigram, a fierce battle is on between West Bengal Chief Minister Mamata Banerjee and her one-time close aide Shuvendu Adhikari who defected to the BJP.

A polled electronic voting machine was found being transported in the vehicle of a BJP candidate, Krishnendu Paul from Patharkandi in Assam.

The Election Commission of India barred BJP leader Himanta Biswa Sarma from holding public meetings, processions, and interactions with the media in connection with the ongoing elections for 48 hours, based on a complaint from the Congress.