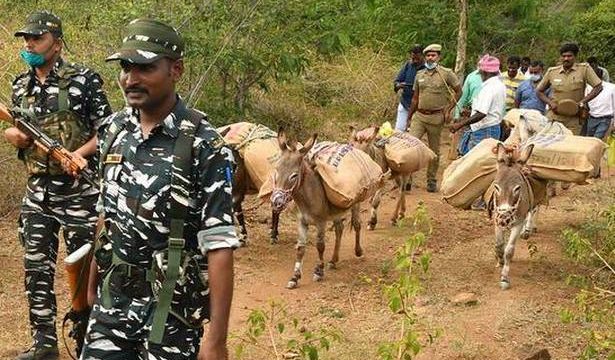 During every election, three hill hamlets in Dharmapuri district and one in Erode get polling materials delivered by donkeys. For years, these villages have remained inaccessible to vehicles, and can be reached only on foot. As in the past, donkeys on Monday began to trek up to help in the election process.

Coming under the Bargur panchayat, the village is located 1,200 metres above sea level inside the reserve forest area of the Chennampatti Forest Range in the Erode Forest Division. With no power supply, only solar lamps light up the village, which does not have mobile phone connectivity either.

The Government Tribal Residential Middle School serves as the polling booth at Kathirimalai. Though it is in the Erode revenue district, the village can be reached only after four hours of trek from Kathiripatti at the foothills at Kolathur in Salem district.

A team, led by Zonal Officer V.S. Palanivel and comprising polling and police personnel and forest guard, travelled 58 km from Anthiyur and reached Kathiripatti. While EVMs and VVPAT units were loaded on the two donkeys, other polling materials were carried as head-load by 10 local people. The team started at 3.30 p.m. from the foothills and was expected to reach the hilltop by 7.30 p.m.

After polling ends at 7 p.m. on Tuesday, officials have to climb down at night to reach the foothills, from where they can drive to the counting centre at the Institute of Road and Transport Technology at Chithode. The total distance they have to cover is 78 km.

At Pennagaram in Dharmapuri district, EVMs were fastened to donkeys to reach Kottur, Kottu Alakettu and Erimalai. The run-up to the election was marked by a poll boycott threat by the villages over the lack of roads to reach the hill hamlets. Chinnaraj, 61, has been at it for 43 years, making his donkeys carry ballot boxes to the villages uphill.

However, this time, a section of the Kottur residents declared a poll boycott for want of better roads. Officials visited the village that has 730 voters to promise them roads and persuade them to vote. Though a tar-top road had been promised at every election, the villagers had to contend with only a ‘kuccha’ road. And, every election, it has become a routine for Chinnaraj and his donkeys to lug ballot boxes to the village.