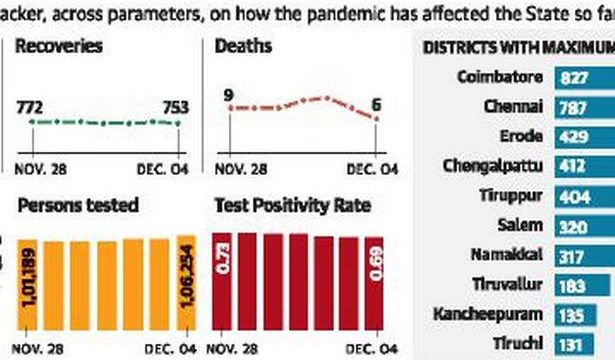 Tamil Nadu saw a marginal increase in fresh COVID-19 infections, with 731 people testing positive on Saturday. Chennai and Coimbatore continued to record a rise in daily cases, as 136 and 130 people tested positive respectively.

The State had reported 711 cases on Friday. Though the daily cases saw a small rise in Chennai — from 128 the previous day — the city recorded no death due to COVID-19.

There were 57 cases in Erode, while Chengalpattu and Tiruppur recorded 54 and 50 cases respectively.

Forty-five people tested positive in Namakkal and 39 in Salem.

Two districts — Ramanathapuram and Tenkasi — did not report any fresh case. Twenty districts logged fewer than 10 cases each. Of these, five districts — Ariyalur, Mayiladuthurai, Theni, Tirupattur and Tirunelveli — recorded a single case each. Among those who tested positive in the State was one returnee from the U.K., three from West Bengal and one from Bihar.

The fresh cases took the State’s tally to 27,29,792. The number of deaths due to the infection dropped to six — two in private hospitals and four in government facilities. The fatalities took the toll to 36,519. There was no COVID-19 death in 32 districts. Coimbatore, Erode, Namakkal, the Nilgiris, Salem and Thanjavur reported one fatality each.

The Union Ministry of Health and Family Welfare said three districts — Vellore, Tiruvallur and Chennai — had shown an increase in weekly cases this past week.

In a letter to Health Secretary J. Radhakrishnan, Union Health Secretary Rajesh Bhushan said Tamil Nadu had reported 23,764 cases in the month ending December 3 (30 days). The three districts had registered an increase in weekly fresh cases in the past week. Vellore registered the highest percentage change in the weekly new cases at 37.63% — from 93 from November 19 to 25 to 128 from November 26 to December 2. Similarly, Tiruvallur, which logged 117 cases. went on to report 136 the following week. From 845, Chennai’s count rose to 981 the following week, registering a 16.09 percentage change.

The Union Health Secretary said steps to control the spread of infection and reduce fatalities should be taken, as per the ongoing strategy of test-track-treat-vaccinate COVID-19-appropriate behaviour.

“In Tamil Nadu, in addition to following the protocol for the Omicron variant, we are focusing on the Delta strain,” he said.