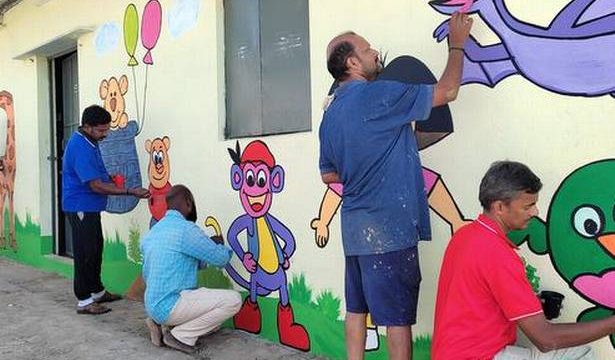 A group of teachers from Tiruppur, under the banner Pattampoochi (butterfly), painted the walls of the special training centre at Periya Gundri in Kadambur Hills with popular cartoon characters to attract students.

It is one of the 15 centres run under the National Child Labour Project (NCLP) in the district where rescued child workers and school dropouts below 14 years were admitted and given training and later enrolled in regular schools. The centre with 56 children is run by Sathyamangalam-based NGO, Service Unit for Development Activities in Rural (SUDAR) that received a facelift with the construction of a new building recently.

The team, comprising T. Karthikeyan, B. Ravichandran and R. Prabhu led by its coordinator A. Santhosh Kumar, all working at different government schools in Tiruppur district, stayed in the centre on December 28 and 29, and completed the painting work. Characters from popular shows and awareness slogans were painted on the walls. The paintings were sponsored by Avinashi-based trust Inaindha Kaigal while NCLP coordinator C. Sathish assisted the team in decorations.

“The purpose is to motivate and encourage children to create their own drawings and also to ensure they come to school regularly,” Mr. Santhosh Kumar told The Hindu. He said they had done such paintings in 60 government schools from 2019 till now in the districts of Coimbatore, Tiruppur and Erode. In Erode district, the team had decorated the NCLP centres at Vilankombai tribal settlement and at Kongadai in Bargur Hills.