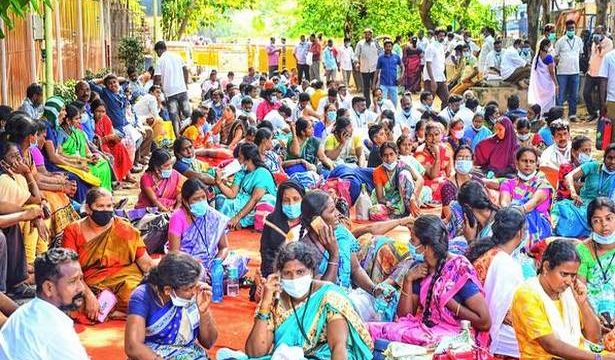 Scores of health workers staged a protest in front of the Directorate of Medical Services demanding that they be made permanent employees.

The State government had appointed 3,000 health workers eight years ago for a consolidated pay. The workers since formed an association and have been demanding that they be absorbed.

K. Mariappan, president of the Tamil Nadu Multi-Speciality Hospital Employees Association, said Health Minister C. Vijayabaskar told the Assembly in 2019 that the workers who had completed five years of service would be absorbed. “It has been over a year since he made the announcement but nothing has happened since then,” he said.

“We were appointed as temporary staff. The Minister made the statement in a reply to a question in the Assembly. We have been given the position of multipurpose hospital workers. The government combined five posts such as nursing assistants, sanitary workers, hospital workers, and cleaners. We were appointed instead. We get a consolidated pay but do not enjoy benefits such as leave with pay. Till date it has been no work no pay.”

The employees observed a day’s fast on the DMS premises to draw the attention of the government, Mr. Mariappan said.