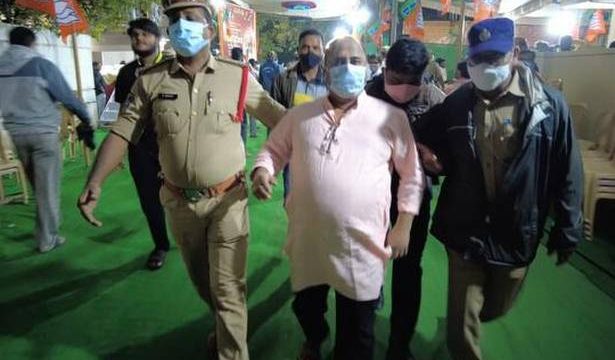 Tension prevailed at Telangana State BJP chief and MP Bandi Sanjay Kumar’s camp office here on Sunday night when the police took several BJP leaders and cadre into preventive custody citing the COVID-19 safety norms when the latter gathered at the office to participate in the 10-hour ‘Jagarana Deeksha’.

The deeksha was called by Mr. Sanjay to press for amendments to the “controversial” GO 317 and frame fresh guidelines for transfer of employees and teachers based on nativity in consultation with the unions representing the staff.

Minutes before the scheduled start of the deeksha, a large posse of police arrived at the MP’s camp office and dragged away several BJP cadre, who gathered at the deeksha site. Mr Bandi Sanjay reached the venue riding pillion on a bike amid tense situation and entered his camp office amid loud sloganeering by the cadre against the TRS regime. He, along with a few other senior leaders, reportedly commenced the deeksha inside the office building even as the police shut the main entrance shutter of the meeting hall to prevent the party cadre from going inside.

Speaking to mediapersons from inside the locked shutter, a visibly angry Mr Sanjay alleged that the TRS regime was trying to curb the democratic protest to amplify the travails of thousands of employees and teachers distraught over the ‘arbitrary’ zonal transfer policy (GO 317). He hit out at the TRS dispensation accusing it of thrusting the controversial GO on the employees and teachers in a dictatorial manner.

Taking a dig at Chief Minister K. Chandrasekhar Rao, he said that the TRS regime remained callous to the travails of thousands of teachers and employees whose struggle ‘Sakala Janula Samme’ paved the way for formation of Telangana State. He warned of serious consequences if the persons at the helm obstructed the democratic protest on “one pretext or another.”

Meanwhile, Karimnagar Police Commissioner V. Satyanarayana told mediapersons that they were strictly implementing the COVID-19 safety regulations stipulated by the Central and State governments to stem the spread of COVID-19.

“The ‘large gathering’ at the deeksha is unauthorised and those found violating the regulations have been taken into preventive custody,” he added. The tense situation continued at the site till reports last came in, even as additional police forces were deployed near the venue to prevent untoward incidents.