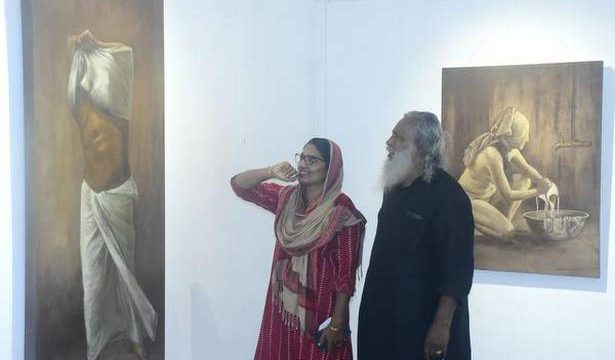 It was a mystery woman who walked into her studio one fine day who inspired artist Sara Hussain, an unconventional artist from Alappuzha, to come up with her latest series ‘What the Body says…’.

The exhibition that began at the Kerala Lalithakala Akademi Art Gallery in Kozhikode on January 2 is an ode to that woman who forced the artist to overcome her deepest conditionings regarding the body. Until then, Sara had viewed the body, especially the female body, as “a space of fear, a certain kind of taboo, and a nameless shame that is meant for open view.” The woman posed for her in the nude, wearing just a turban veil, making the artist struck by the beauty and, at the same time, experiencing a sense of shock.

What the Body Says… is modelled on that woman, along with Onyx Poulose, Sara’s mentor, in quite unromantic and asexual poses, unlike the popular depiction of nudity. Sara calls her characters ‘Yaksha’ and ‘Yakshini’. However, Yakshini here does the day-to-day household chores such as mopping the floor, washing undergarments, or better yet sighing in relief as she sits in a corner with a few morsels on her plate, exhausted from a day’s work.

On the other hand, Yaksha gets ready for the bath, wiping his head after a bath, or sometimes idly sitting in an armchair doing nothing, wearing a quite unimpressive dhoti. In another painting, he is lying in a near fetal position wearing a small loin cloth, as would a newborn baby, opposite Yakshini who faces him in the same position.

The faces of the characters are concealed in most pictures for a reason. “When we look at someone, we invest identity only on that person’s face, especially the eyes,” Sara says, adding that the face being covered “opened awareness fully to the majesty, the simplicity, and sheer power of presence of the body.”

The expo, opened by artist-curator Bose Krishnamachari, will conclude on Sunday.