Titan accounted for 59.6 per cent of his disclosed portfolio at Rs 8,355 crore. This is more than 10 times the next biggest holding, Federal Bank, at Rs 619 crore. 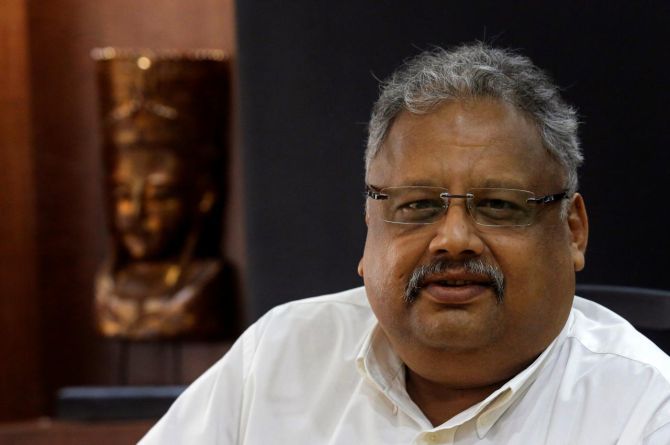 Rakesh Jhunjhunwala’s outsized bet on watch and jewellery maker Titan has helped the value of his disclosed portfolio register a 3.6 per cent gain in the quarter ended June 2019.

This is nearly twice the 1.87 per cent gain in the S&P BSE Sensex during the same period.

The value of his disclosed portfolio is down Rs 757.1 crore if one excludes Titan.

The numbers are based on a Business Standard analysis, which identified 13 names through which he holds stake from the shareholding pattern declared by companies.

This includes his name, his wife’s name, various combinations of his family members’ names.

His disclosed portfolio’s rise in value is lower than the last couple of quarters.

The March quarter showed an 8.9 per cent gain.

Best-performer by value-added, Titan accounted for 59.6 per cent of his disclosed portfolio at Rs 8,355 crore.

This is more than 10 times the next biggest holding, Federal Bank, at Rs 619 crore.

Titan was up 17.3 per cent in the June quarter.

While analysts are positive on Titan, it has been seeing some headwinds.

Volatility in gold prices led to a 6 per cent decline in earnings estimates for the current year and the next one, noted a Motilal Oswal Securities Results Update note on August 6, authored by analysts led by Gautam Duggad, head of research.

“However, the longer-term investment case remains strong as Titan is well placed to grow its share in the largely unorganised jewelry market in India from the current level of 8 per cent,” it said.

The stock has declined over 20 per cent since the end of June.

It now accounts for 65.5 per cent of his portfolio.

Other bets in the sector include VIP Industries, Delta Corp, and Agro Tech Foods.

Jhunjhunwala’s allocation to financials is down from 15.1 per cent to 13.6 per cent.

His stake in troubled lender DHFL has declined from 3.19 per cent to 2.46 per cent.

The firm has been struggling to meet debt repayments.

The company’s value halved to Rs 2,263 crore over the June quarter, and has dropped further since.

Its market capitalisation was Rs 1,550.3 crore on Wednesday.

Mid-caps account for another four. Large-caps are only two: Titan and pharmaceutical company Lupin.

Firms are required to disclose names of shareholders whose stake exceeds 1 per cent.

This means that there may be other companies in which he holds stake.

An email requesting comment did not receive a reply.

But the list provides a broad indication of which way his portfolio may have moved.

The median stock is down 11.5 per cent for the twenty-two companies in which stake was unchanged over the previous quarter.

He’s cut stake in firms including Lupin and Federal Bank.

The companies in which he’s raised stake include SpiceJet, Jubilant Life Sciences and Titan.