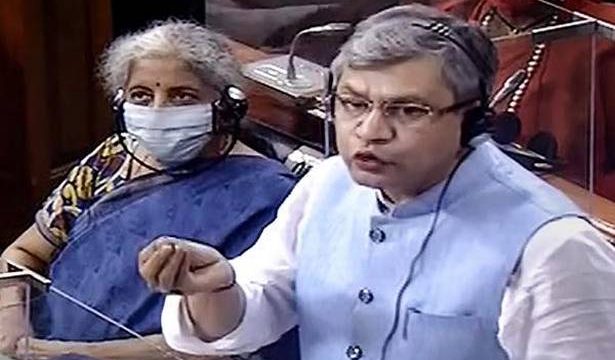 No illegal surveillance possible in India: IT Minister

Information Technology Ashwini Vaishnaw on Monday told the Lok Sabha that no illegal surveillance was possible in India, given its laws and robust technological framework. He alleged that the news of a Pegasus software being used to illegally tap phones was an attempt to malign the Indian democracy.

The Supreme Court on Monday gave the Pinarayi Vijayan government in Kerala less than 24 hours to explain its reasons for relaxing COVID-19 restrictions between July 18 and July 20 for Bakrid celebrations while noting that any incident which directly affected lives would be viewed sternly and result in “prompt action”.

Accusing the government of “treason” and compromising on national security over the Pegasus spyware issue, the Congress on Monday demanded the sacking of Home Minister Amit Shah and a probe into the “role of Prime Minister” Narendra Modi in the matter.

Bombay HC: For how many years will people languish in jail without trial

The Bombay High Court on Monday observed, “For how many years without trial, can people languish in jail. Speedy trial is a fundamental right.” A Division Bench of Justices S.S. Shinde and N.J. Jamadar made the comment with respect to those accused in the Bhima Koregaon caste violence case.

Vehement protests from the Opposition parties on repeated fuel prices hike, ongoing farmers’ agitation and alleged mishandling of the COVID-19 pandemic among other issues led to multiple adjournments in the Rajya Sabha on the first day of the monsoon session of Parliament.

The Supreme Court on Monday asked the Gujarat government if more innocent people should lose their lives to blazes in poorly-equipped private hospitals and nursing homes after learning that the State has given a long rope to violators of building and fire safety norms despite an apex court direction for immediate compliance in December 2020.

Following revelation that NSO Group’s ‘Pegasus’ software may have been used to snoop on journalists, politicians and activists worldwide, including 300 Indian numbers, WhatsApp CEO Will Cathcart has called on governments and companies to take steps to hold the Israeli technology firm accountable.

The final results for class 12 State Board students in Tamil Nadu were announced on Monday, and all 8.16 lakh students have passed. The board exams for these students, scheduled to be held earlier this year, were cancelled owing to the COVID-19 pandemic.

COVID-19: If we don’t vaccinate quickly, public health will be in jeopardy, say experts

If we do not vaccinate quickly, public health can be in jeopardy and with that is also linked economic growth. So the sooner more number of people get vaccinated the better it is for society and the country, say doctors who have also expressed their worry about the slowing down of the falling COVID-19 numbers and the growing threat of a third wave.

Toyota won’t be airing any Olympic-themed advertisements on Japanese television during the Tokyo Games despite being one of the IOC’s top corporate sponsors. The extraordinary decision by the country’s top automaker underlines how polarizing the Games have become in Japan as COVID-19 infections rise ahead of Friday’s opening ceremony.

Have informed discussions on pandemic to better prepare for possible third wave: Venkaiah Naidu to MPs

Rajya Sabha Chairman M. Venkaiah Naidu on Monday urged members to have informed discussions on all aspects of the COVID-19 pandemic so that the country is better equipped to tackle the possible third wave. The monsoon session, which has 19 sittings scheduled, assumes enhanced significance in the context of the prevailing situation in the country and the suffering of the people further compounded by the possible third wave, he said.

Now, Samajwadi Party says Brahmins are with it

After Bahujan Samaj Party (BSP) chief Mayawati announced a new outreach campaign to woo the Brahmin community, the Samajwadi Party (SP) said the community still remembered the “oppression” faced under her rule through “false” cases lodged under the SC/ST Act.

The Delta variant was primarily responsible for the second wave of COVID-19 in the country, accounting for over 80 per cent of new cases, Dr. N.K. Arora, co-chair of Indian SARS-CoV-2 Genomics Consortium said, underlining that the cases may go up if a new, more infectious variant comes.