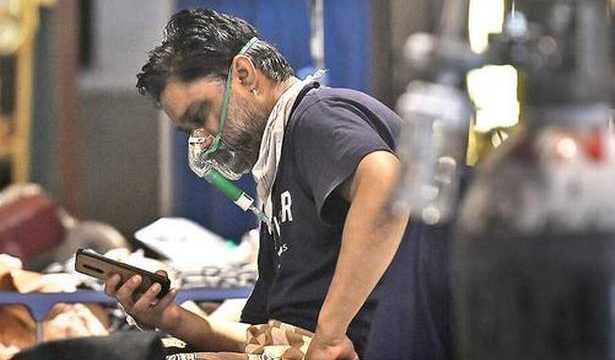 Being caregiver and patient at the same time is taking a toll; many dependent on home-delivered food

From reaching out on social media for help to turning to neighbours and relatives for help, families where all members have tested positive are facing a difficult time in managing essentials.

While several are now dependent on home-delivered food and medicines, many others are anxious about the continuing shortage of beds, injections and oxygen and wary of the steps to be taken in case of an emergency, requiring hospitalisation.

For many others, being a caregiver to a family member while taking care of themselves at the same time, are also taking a toll.

Bhavya D.N. (26), who tested positive recently, said: “It was initially my father who was infected and in the process of taking care of him, my mother and I caught it as well. When my mother developed symptoms, I was the one having to manage all domestic chores apart from office work. We are getting most of the medicines delivered at home.”

“As of now, we are managing well, but there is a constant fear that the health of one of us might deteriorate and with limited resources, it is a very scary thought,” the east Delhi resident said.

Procuring medicines, which are out of stock, have also posed a major issue for the families where all the members are affected and isolated.

Deepika Sethi, a resident of Kailash Colony, said: “It all started when our cook developed symptoms and although he isolated himself immediately, my elderly parents-in-law started showing symptoms the next day and I started showing symptoms the day after. We all tested positive. My husband and children, aged nine and 13, were staying in the flat upstairs, which is empty. But my husband also got infected and now my children are upstairs alone. It becomes tough when doctors ask for a CT scan or prescribe medicines that are out of stock. Other friends and family are also going through a similar situation, so asking for help also becomes impossible.”

Ms. Sethi added that keeping her children safe was turning out to be a tough job as they have to get food from outside and are unable to deal with the loneliness.

For 32-year-old Reema, arranging for an injection for her father, who had to be hospitalised, proved to be big a hurdle with all other members being affected as well.

“We had to reach out on social media and even there we did not get volunteers who could stand in queues and get the injection. Everyone at home was affected so there was nobody who could visit from one shop to another. I had to finally reach out to a colleague of mine as we had no other option,” said Ms. Reema.