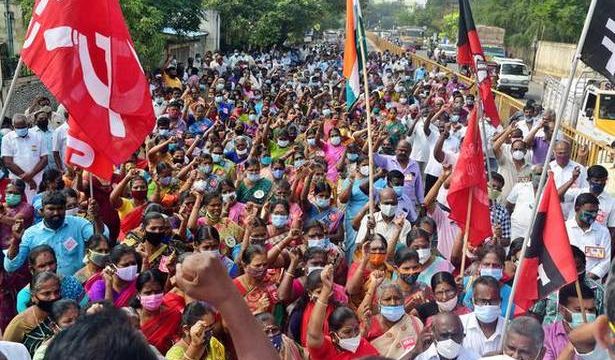 Workers of National Textile Corporation mills in Coimbatore staged a protest here on Wednesday demanding re-opening of the mills.

Sachin Mohan Ahir, chairman of Save NTC movement, told presspersons here on Wednesday the mills had remained closed since last year following the lockdown to control COVID-19 spread. This had affected over 20,000 workers of the mills across the country and their family members. The workers were paid just 50 % of their basic wages and DA.

As many as 23 trade unions have joined hands to demand the Central government to reopen the mills. “The workers are willing to work. Funds are available. But, the Central Government does not want to run the mills,” he alleged.

The Ministry of Textiles is not disclosing its plans. There are about 600 acres of land sitting idle with the mills. These can be monetised to plough in resources to revive the mills. The Maharashtra Chief Minister is willing to lead a delegation of Chief Ministers to meet the Prime Minister to highlight the need to restart the mills, he said.

He said the trade unions would hoist black flags at NTC offices on January 26, after the hoisting of national flag.

Following the protest in Coimbatore on Wednesday, the workers will stage a demonstration in Kerala next month. They will organise protests in Ahmedabad too and will not relent till the mills are re-opened and labourers get work.

Coimbatore MP PR Natarajan said a delegation of MPs had met the Textile Minister and sought reopening of the mills. But, the government seems to have other plans, he added.