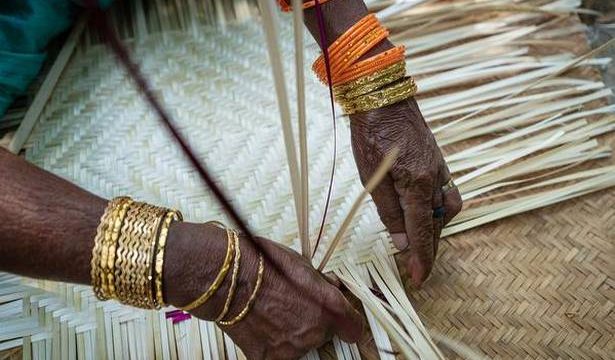 Nagamma and Kannamma from Adichilthotti, a tiny hamlet in the Edamalayar valley in Kerala, have been trekking the rain forest in the Western Ghats for over four decades to collect the bounty of the jungle. Crossing swift streams, they walk uphill along fern-covered rocks, returning with bundles of reed bamboo. These are woven into exquisite kannadi paaya (mats with the sheen of mirrors) and baskets for their personal use. For the Muthuvar tribe, which they belong to, reed bamboo weaving is a skill handed through generations.

Now, these traditional mats, along with food, cosmetics and artisan products from the forest are finding new markets thanks to the tribal communities joining hands with village collectives, volunteers and Forest Post.

Manju Vasudevan, co-founder of Thrissur-based Forest Post, which is an online offshoot of the 16-year-old River Research Centre (RRC), explains how they want to “convey the message of conservation and resilient livelihood.” She adds, “We strengthen market linkages and help the women gain a sense of ownership, as well as pride in their skills and knowledge of the forest… It is a livelihood support programme that encourages them to continue lifestyle practices of the communities such as harvesting and documenting sustainable food.”

Each product has a story of resilience behind it as they are predominantly made of produce harvested and collected from the deep forests in the region by the tribal men and women of six villages — Karikkadav, Anapantham, Chimmony, Kallichitra, Adichilthotti and Vazhachal in the Chalakudy and Karuvannur river basins of the Western Ghats.

Also Read | The growing movement of ‘forest bathing’ in India

In May 2014, the Kadar in this region were recognised as a particularly vulnerable tribal group. The village councils won Community Forest Rights (CFR), so the Kadar could collect, harvest and sell produce from approximately 40,000 hectares. This area, the first in Kerala to be given the CFR, is also the home of the Muthvan and Malayar tribes. Most of this produce was sold via village collectives, but with challenging transport logistics, it meant the market was small and not always profitable. The online Forest Post came as a solution to these stumbling blocks.

The effort to find markets for forest produce and value-added products started in 2017. With a grant from the Keystone Foundation in Kotagiri (which works with indigenous communities using eco-development approaches), and working under the Global Alliance for Gender and Green Action, the livelihoods team at RRC began to collaborate with the communities in the forest.

“We began engaging with the tribal communities, many of whom migrate to urban areas to earn a living. The idea was to set up enterprises that provide them with a living and nurture their skills. It was necessary to create sustainable business models for the tribal communities. That was made possible with the help of UNDP-India,” says Sreeja KG, agricultural economist and co-founder of Forest Post.

For three years, Jipsa Jagadeesh, a volunteer at RRC, and Manju met harvesters in the Kadar village of Anapantham, where they organised a wild juice festival featuring everything from jamuns to raw mango in Vazhachal, another Kadar village. Later, resources such as Cycas (Queen Sago, once a staple food in many parts of Kerala), ferns, sour lime, wild grape and asparagus were included in the harvesting protocol.

The villages work together: the harvest from one village, usually inhabited by the Kadar people, is transported to a Malayar village to be turned into pickles, preserves, jams and sun-dried foods.

Aadhimalai, a group in the Nilgiris, trained the Malayar women of the Karikkadav village in food processing and making new products from beeswax and honey collected from the forests. In the basketry village, women were encouraged to weave smaller sizes of Kannadi Paaya for contemporary decor, as well as diversify design with treatment and dyeing. “Uravu, pioneers in bamboo training from Wayanad, spent a week in Adichilthotti to help them chisel their bamboo craft skills. There will soon be planters, lampshades, trays and coasters added to the product range,” says Manju.

Macrame jewellery made by Kadar women in Anapantham village is included under the brand. By tradition, the women are gatherers of forest produce, but they were trained in macrame and tailoring by Anita Reddy from Bengaluru and Meera Abraham from Thrissur. People are now inviting the tribal women to do training in other villages. One more village, near the Chimmony dam, will soon be making spiced honey and beeswax products.

Bindu Sivan from the tribal village Karikkadav, collects edible ferns from adjoining forests, which are pickled and now find buyers from across the country. “Their traditional diet includes forest produce that is not always sold. The tribes almost always know when something wild should be harvested, where it is available, how much to be harvested, with a sense of intuitive wisdom,” says Manju, adding “In a way, they are conserving the forests for the future.”