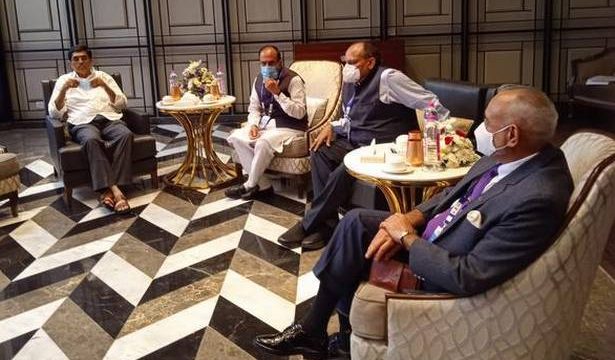 The Telangana government has put up a strong defence against objections raised by Karnataka over the construction of two irrigation projects, Palamuru-Rangareddy and Nakkalagandi LIS, claiming that the two projects are taken up in line with the allocation made to the State.

The government countered the neighbouring State’s argument saying that “Karnataka has no concern in this matter and cannot object to the project as the two projects are taken up within the entitled share of Krishna waters.” The issue of allocation of Krishna water between the two Telugu States was being dealt with by the Brijesh Kumar Tribunal (KWDT-II) and the Telangana government had assured that it would abide by the allocation made by the tribunal in respect of the two projects.

The ongoing and the proposed projects in the State were discussed during the meeting of the Southern Zonal Council (SZC) chaired by Union Home Minister Amit Shah in Tirupati on Sunday. The meeting discussed the detailed project reports of Palamuru-Rangareddy LIS and Nakkalagandi LIS proposed to lift water from the foreshores of Srisailam reservoir.

Based on the contention made by Telangana, the SZC resolved to ensure that the DPRs would be submitted to the Krishna River Management Board (KRMB) by January 15, so that the Central Water Commission would appraise the reports. The meeting also discussed construction of the Sangambanda barrage that could lead to submergence of villages in Karnataka.

The State government said that it had already addressed a communication to Karnataka asking the government to conduct a joint survey to resolve the issue of submergence.

The State government has resolved that dues to AP Genco payable by Discoms was ₹3,442 crore. This assumes significance in the light of the fact that the government of the neighbouring State had been claiming that Telangana is due to pay ₹6,015 crore to AP. The Telangana government represented by Chief Secretary Somesh Kumar and Special Chief Secretary (Finance) K. Ramakrishna Rao contended that ignoring the requests made by Telangana, the AP government preferred legal recourse by approaching the National Company Law Tribunal under Insolvency and Bankruptcy Code 2016 (IBC).

The State in fact should get ₹4,457 crore from AP after setting off the power purchase dues.

Regarding the division of properties of AP Bhavan in New Delhi, the AP government had proposed two options in terms of Section 48 (1) of the AP Reorganisation Act 2014 and the matter has been under discussion between the CMs of the two States. Since there were certain differences between the two governments over the permitted floor space index among the two pieces of property, the Telangana government had informed the meeting that it was working on a third proposal that would be submitted to the AP government for expeditious redressal.