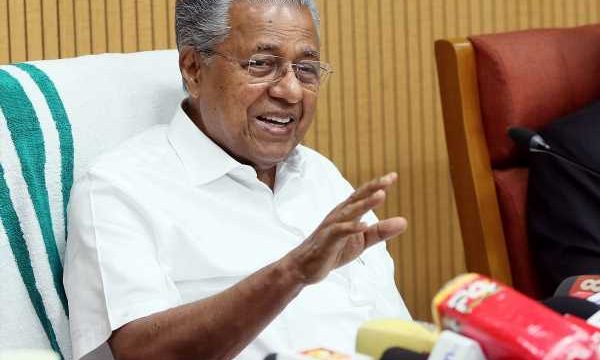 Kerala CM and CPI-M strongman Pinarayi Vijayan has been facing one of the biggest political crises after the Trikkakara by-poll rout and subsequent fresh set of allegations against him and family by Swapna Suresh, prime accused in the gold smuggling case, reports Shine Jacob.

A ‘Captain comrade’ who has led Kerala in crisis in the past, steering the Left ship to safe waters in the 2021 assembly elections with a thumping win and rewriting the state’s political history of voters swinging between the Congress and Communists once in five years, Chief Minister Pinarayi Vijayan is seen as both an able administrator and a slick propagandist by his followers.

His detractors call him ‘Modi in mundu’, owing to his style of functioning.

But the Communist Party of India-Marxist strongman is facing one of the biggest political crises in the past few weeks: first, through the loss of the Thrikkakara assembly by-election; two, a fresh set of allegations against him and his family in the sensational Kerala gold smuggling case.

In the political scheme of things, the Thrikkakara bypoll is irrelevant since the government has 99 of the 140 seats in the assembly.

However, experts indicate that where the CPI-M may have flubbed is by giving it more prominence than originally intended.

Pinarayi, 20 of his ministers, and members of legislative assembly had camped in the constituency for several days at a stretch — even doing door-to-door campaigns.

One more seat would have made little or no difference to the stability of the government, but the election management of the CPI-M came unstuck when the ambitious K-Rail project was made the main poll plank in the by-election.

Making the proposed rail corridor, strongly opposed by the Congress-led United Democratic Front, a major campaign topic in the constituency, Pinarayi said it was a battle between the proponents of pro-development and anti-development.

Also known as the SilverLine project, it is a semi-high speed rail connecting Kasaragod and Thiruvananthapuram at an investment of around Rs 63,941 crore.

Even as attempts to lay the survey stones for the state government’s ambitious SilverLine rail corridor triggered clashes between local residents and the police near Kaniyapuram in Thiruvananthapuram district, the government still underscored K-Rail as its flagship development project during the first phase of the by-poll campaign.

To Pinarayi, a victory in Thrikkakara would have come as public endorsement of his development initiatives, including the controversial K-Rail project, which has witnessed widespread Opposition-led protests across the state.

“But voters in Thrikkakara snubbed the CPI-M’s overtures and handed yet another win to the Congress,” said Sunnykutty Abraham, a senior political analyst.

Justifying the poll debacle in the Thrikkakara by-election, the CPI-M said the UDF won the election as it was able to unite the anti-Left elements.

“The people of Thrikkakara have spoken resoundingly against ‘mundu Modi’s’ arrogance and his pet K-Rail project, reflecting the sentiment of hundreds of thousands across Kerala,” said senior Congress leader Jairam Ramesh after the victory.

Following the elections, in which Congress candidate Uma Thomas won by a margin of 25,000 votes, it was the CM’s widespread campaign that led to the people calling Opposition leader VD Satheesan the ‘real captain’.

However, the real crisis for Pinarayi was about to flare up in the form of Swapna Suresh — a key accused and a former employee of the United Arab Emirates consulate in the ‘diplomatic baggage’ gold smuggling scam.

Before her media outreach, Suresh had given statement under Section 164 before the court about the involvement of the CM, his former principal secretary M Sivasankar, Pinarayi’s wife Kamala, daughter Veena, his additional private secretary CM Raveendran, former bureaucrat Nalini Netto, and former minister KT Jaleel.

She claimed that a baggage containing currency was even sent to Pinarayi when he was in Dubai in 2016.

The state Congress unit staged protests in Kannur, Kochi, and Pathanamthitta, seeking his resignation over his alleged involvement in the case.

She alleged biryani vessels holding heavy metals used to be taken to Cliff House, the official residence of the CM, from the consulate general’s house, following Sivasankar’s directives.

The case hit national headlines after Customs seized over 30 kg of gold worth Rs 14.8 crore at Thiruvananthapuram international airport in July 2019 in a ‘diplomatic baggage’.

“Although Pinarayi was allegedly involved in the SNC-Lavalin case as well, there were no allegations against his family. This seems to be the biggest political calamity he’s faced after becoming CM,” Abraham told Business Standard.

The SNC-Lavlin case pertained to a Rs 374.5-crore deal between Kerala State Electricity Board and Canadian firm SNC-Lavalin for the renovation of Pallivasal, Chenkulam, and Panniyar power projects in 1995.

Later, the Central Bureau of Investigation had found that the deal made a loss of Rs 86 crore to the exchequer due to a conspiracy in which Pinarayi was purportedly involved.

Political experts indicate that if the current allegations are proven, it may turn out to be the biggest political setback, close on the heels of a poll debacle.