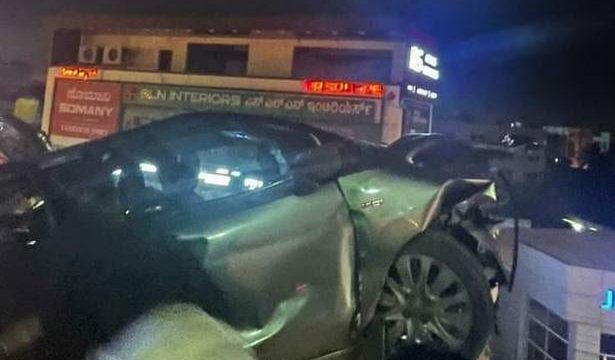 Two persons were killed after they fell from the flyover of Electronics City on Tuesday night while a few others sustained injuries when a speeding car knocked down a two-wheeler.

According to the Electronics City traffic police, the accident occurred around 9.15 p.m. near the layby in Singasandra.

The car, heading towards Hosur, is suspected to have hit a Tamil Nadu registration two-wheeler, also heading in the same direction, before ramming on to the side wall of the flyover. The car was found hanging on the sidewall, police said.

A woman and a man on a two-wheeler were tossed in the air and crashed on the road around 30 feet below the flyover. The identity of the deceased persons is yet to be ascertained by the police. The driver of the car has been identified as 23-year-old Nitesh.

The impact of the accident was so high that the bodies were left in a bad state.

The freak accident left motorists and passers-by in shock. Both traffic and law and order police rushed to the spot to clear the crowd and make way for the movement of the vehicles.

At the time of going to press, the police were conducting a spot inspection to ascertain the cause of the accident. The driver of the car is missing.

“Probably, he/she was injured and escaped from the spot to get treatment,” a police officer said.

Traffic on the busy Hosur road, on the flyover and below, was disrupted for sometime.