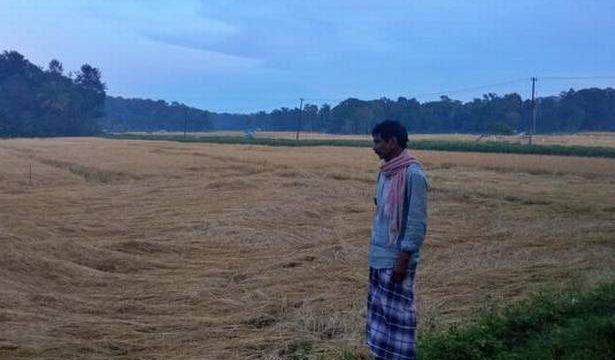 Concerns over yield as harvest is yet to begin

Though the traditional rice varieties can withstand harsh climatic conditions, they have drawbacks such as low yield and lodging characteristics. (Lodging is the bending over of the stem of grain crops, which makes them difficult to harvest.)

“Usually, harvest will be over by the first week of November but, this year, we are yet to start harvesting owing to unseasonal rain. Hence, plants have started to lodge and paddy has began to germinate on the field itself,” says A.K. Gopinathan, a member of the Alathur tribal hamlet.

“When farmers sow seeds they also erect tree houses to keep wild animals away from the paddy fields, which are on the fringes of the Wayanad Wildlife Sanctuary. Our year-long hard work has gone in vain,” he says.

Mr.Gopinathan, who is also the welfare standing committee chairman of the Noolpuzha grama panchayat, has cultivated rice varieties on eight acres following organic methods. He says he had spent around ₹30,000 an acre for the cultivation, but he is not hopeful of recouping even one-third of it after harvest.

“Usually, we get eight to 10 quintals of rice from an acre. This year, there is no chance to get even three quintals,” says K. Balan, another farmer.

“Many farmers here rear a local cattle variety, Wayanadan, and usually get enough fodder for our cattle after harvest. We have no idea how to feed our cattle as the hay is under water and cannot be fed to cattle,” he said.

The condition of many farmers in the district who have cultivated the ‘Nanja’ crop is not different.