‘Washington appears to be playing the long game, and making the argument to India that over the longer term, Russia — sanctioned, cash-strapped, isolated by the West — will no longer be a viable defence partner for India.’

Dr Michael Kugelman, is a leading a specialist on India, Afghanistan and Pakistan, and their relations with the US. He is the South Asia Institute Director at the Wilson Centre in Washington DC.

“India isn’t about to dial down its longstanding special friendship with Russia anytime soon, but the calculus could change down the road,” Dr Kugelman tells Rediff.com‘s Archana Masih in the concluding part of the interview.

External Affairs Minister Dr S Jaishankar recently said at an interaction at the Lowy Institute in Australia that the last five US presidents have followed a consistent India policy and that the Biden administration is extraordinarily experienced because the secretary of state, the NSA and the CIA director — if put together — have 100 plus years of experience.
How has the India-US relationship evolved under President Biden?

Despite their differences on many issues, we’ve seen ample continuity between President Trump and President Biden on policy in Asia, and policy in India is no exception.

Biden’s administration, like its predecessor, views India as a critical partner in efforts to counter China — Washington’s most pressing foreign policy goal and one that enjoys bipartisan support.

So the Trump administration essentially passed the baton on India policy to the Biden administration, and the changeover has gone very smoothly.

For example, one of the Biden administration’s main priorities in the relationship with India this year has been implementing the foundational defence agreements that were finalised during the Trump era.

To be sure, US-India relations have not been a carbon copy of what was seen in the Trump era. There have been two new challenges. One is that the Biden administration emphasises human rights and democracy promotion in its foreign policy, and New Delhi doesn’t take well to the administration’s comments about such issues in India.

The second is, of course, the Russia/Ukraine crisis, and India’s unwillingness to take the position the US wants it to.

But here’s the thing: These are two very real challenges for the relationship, and yet they haven’t impacted the relationship in a big way (and it helps that the US has muted its public criticism of rights issues in India, and accepted India’s position on Russia).

It says something about the strength of US-India relations that even with these obstacles, the partnership has remained robust. 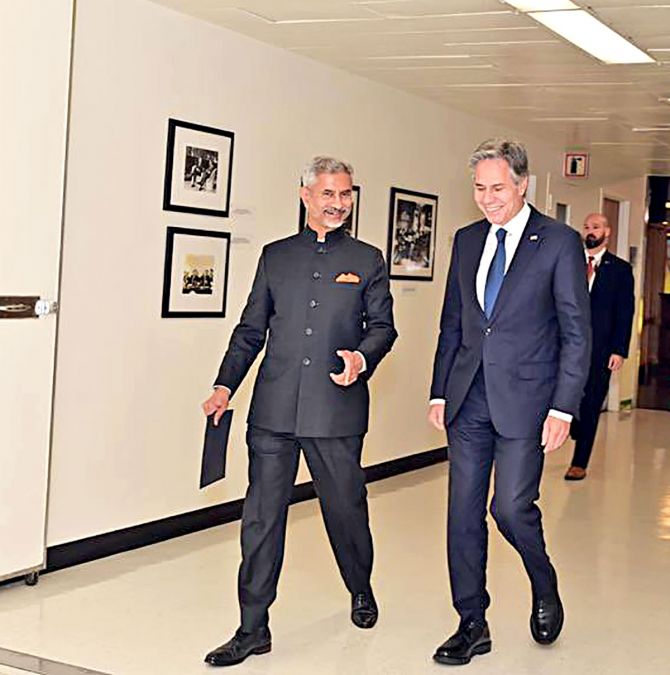 What have been the areas of fresh impetus, strengths and weaknesses?

In terms of areas for fresh impetus, I sense a strong enthusiasm in both capitals for broader cooperation beyond security.

There is lots of discussion, including in leader-level conversations within the Quad and 2+2 sessions, about the potential for collaborations on energy, public health, climate change, and especially tech.

The latter space especially has a lot of momentum, after the two national security councils recently agreed to a new initiative on critical and emerging technologies. That said, tech, like the other areas mentioned above, is a source of potential cooperation but also of disagreement (there are key differences on some aspects of tech policy, for example).

So it would be wrong to say that just because the two sides are looking to expand their cooperation deep into non-security spaces, that everything is coming up roses.

Still, with so much goodwill and momentum in the relationship, and with so many ongoing and high-level dialogues, there will be plenty of opportunities to talk this all through.

The areas of strength have remained consistent: Strong, convergent interests on key geopolitical issues, especially working with Asian and European partners to counter China; a similar shared vision for Asia (underlined in the Indo Pacific policy); robust defense trade; increasing military-to-military cooperation; strong people-to-people ties; and a continuously growing US Diaspora, among others.

The areas of weakness are also longstanding. Trade tensions are ongoing, and the especially contentious disputes on trade during the Trump era haven’t been resolved.

Trade has long been an Achilles’ heel of US-India relations, and that hasn’t changed today, even though the two have made major advances with financial transactions and investment cooperation.

There are also ongoing weaknesses on the geopolitical front, despite being in lock step on the China issue. Each country continues to have good relations with the other’s key rival (The US with Pakistan, India with Russia), though these relationships aren’t as strong as they used to be.

Beyond that, there are some long-term strategic challenges, and above all the question of how to build a long-term security partnership outside of the alliance system that Washington expects its closest defence partners to be a part of.

We know that the US and India are keen to scale up military cooperation, and we’ve seen this through the defence foundational agreements, arms sales, joint training exercises, and cooperation on military logistics (such as the use of each other’s refueling facilities).

But what are the limits to this cooperation, given that India isn’t about to join the alliance system anytime soon? Questions like these have yet to be answered.

Similarly, there are ongoing debates in Washington about what can be done to get India to do more, on operational levels, to help the US deter China. This will be an ongoing challenge, given that India is not an ally in the traditional sense, as defined by the US. What do you think prompted President Biden’s comment about Pakistan being one of the most dangerous nuclear states?

I don’t know, and I’m sure many in the US government don’t know either. Biden is not someone, one can assume, who is thinking about Pakistan much these days.

My most educated guess is that President Biden had recently read or heard an intelligence briefing that highlighted the volatilities playing out across Pakistan: The deep political polarisation, the worsening economic crisis, the shifts in civil-military relations, the resurgence in terrorism from the Pakistani Taliban, and a weak and unpopular government’s inability to manage this all.

Being exposed to recent information like this, coupled with Biden’s legacy concerns about Pakistan’s nuclear weapons, could have triggered his comment.

What I mean here is that Biden’s reference about ‘without any cohesion’ likely referred to broader trends in Pakistan, not to the state of its nuclear weapons programme.

I emphasise the term ‘reference’. Biden made his comments about Pakistan briefly, in an offhand way, while talking about the challenges faced by China’s president. He made them as part of a speech given to fundraisers. It wasn’t a policy speech, and he wasn’t targeting a Pakistani audience. We shouldn’t read too much into his comments.

But I recognise the fact that since he’s the US president and he was talking about Pakistan’s nukes, his comments were bound to cause a furor in Pakistan, no matter what the context of them.

Considering the comment came soon after Pakistan army chief General Qamar Bajwa’s trip to US that has been interpreted in Pakistan as an attempt to reset US-Pak ties. What damaging implications do President Biden’s comment have on Pakistan?

Biden’s comments will harden the negative perceptions harboured by many — if not most — Pakistanis toward US policy.

Anti-US sentiment had been especially sharp in the broader political and public discourse in Pakistan in recent months, thanks to the narrative of Imran Khan — arguably Pakistan’s most popular leader at the moment — alleging that the US was involved in his ouster.

So Biden’s comments will fire up the conspiracy mills and heighten suspicions that the US is up to no good in Pakistan, once again.

However, his comments will not impact Pakistan’s relations with the US in a big way. Washington has walked back his comment, with the State Department essentially contradicting it by stating its confidence in Pakistan’s ability to secure its nuclear weapons.

The reaction from Islamabad was not hostile, and in fact the foreign minister’s response was quite conciliatory, with its emphasis on the need for more engagement to avoid misunderstandings.

Also, the US now has a formal ambassador back in Islamabad after a gap of several years. This can help with damage control as well.

Let’s also be quite clear: Islamabad can’t afford to show anger at the US at this point, given how keen it is for US assistance for flood relief and economic recovery. 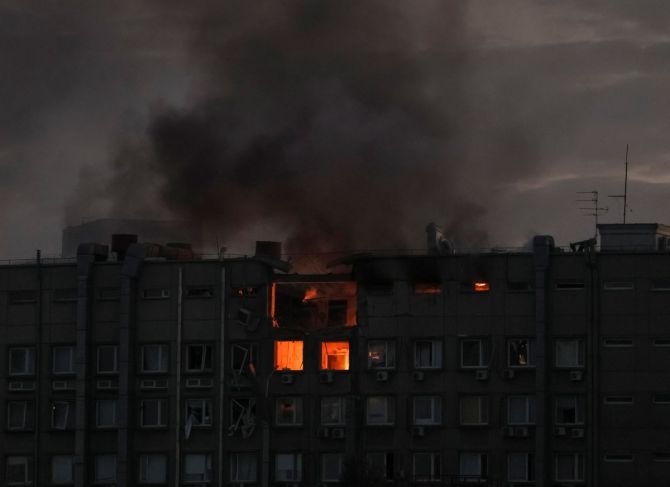 What challenges does India’s stance on the Russian invasion of Ukraine pose for India-US relations in the long and short term?

It’s a challenge, but a surmountable one. Initially, many in Washington were frustrated with India’s stance, but they have now come around to grudgingly accept it, even if they don’t agree with it.

The US policy at this point is not to pressure India to change its stance — which wouldn’t work and would risk inflicting harm on the relationship.

Instead, Washington appears to be playing the long game, and making the argument to India that over the longer term, Russia — sanctioned, cash-strapped, isolated by the West — will no longer be a viable defence partner for India because it won’t have the capacity to produce the type of weaponry that is has long supplied to India.

That’s not a bad argument to make. We’ve already seen India reduce its share of Russian arms imports in recent years, and it’s clear that New Delhi recognises how much Russia’s war undercuts India’s interests (because among other things it is bringing Moscow closer to Beijing).

India isn’t about to dial down its longstanding special friendship with Russia anytime soon, but the calculus could change down the road. So long as Washington understands that, which it does, there’s no reason to fear any damage to US-India ties.