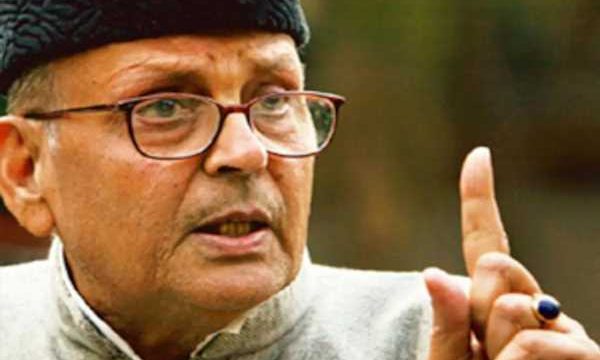 ‘As his close associate Som Pal told me, “Mandal was never V P Singh’s brainchild. It was a Janata Party commitment he inherited”.’
‘He would have done it anyway at some point, but the specific timing of his decision was dictated entirely by political exigency — his government was threatened.’
‘It also turned out to be a game changer in Indian politics.’

Vishwanath Pratap Singh was, and has remained, an enigma for students of Indian political history.

He rose like a meteor in the political horizon and fell equally suddenly.

He sowed the seeds of liberalisation and began the journey towards the free market even as he stood by his socialist moorings and became a torch-bearer for social justice.

He was against communalism but joined forces with rightist parties to gain power.

As Debashish Mukerji, the author of the just published book, The Disruptor, notes in his introduction, ‘For a person who impacted Indian politics as profoundly as did V P Singh, his posthumous neglect is a disgrace.’

On the late leader’s 90th birth anniversary, the veteran journalist tries to ‘redress the imbalance’ through a biography.

“After his decision to implement the Mandal Commission Report, he acquired such a villainous reputation among articulate sections in India,” Mukerji tells Rediff.com Contributor Sujit Chandra Kumar.

You had a long innings as a journalist covering politics in Lucknow and Delhi as the events described in this book unfolded.
Were there any findings that took you completely by surprise about V P Singh while working on this book?

I was really surprised by the quality of the language V P Singh used in his interviews, both in English and Hindi.

I had to read a bunch of his interviews together for my research and especially went through the marathon one he gave the Nehru Memorial Library in his last years very closely.

Obviously, these were extempore, not scripted.

V P Singh’s use of similes and metaphors (which even good writers struggle to get right), some of his casual turns of phrase, were extraordinarily good.

My research convinced me that had he chosen to focus on his poetry — he wrote a little, sporadically, all through his adult life — he would have been a leading poet.

As for events, I was aware of his weird childhood, being given away in adoption at age five to an alcoholic, but that apart, I did not know much about his life before he became UP chief minister in June 1980.

I did not know either that he felt so contrite about the rigging of the Garhwal by-election in June 1981 while he was UP chief Mminister that he would bring it up and apologise 25 years later in his Nehru library interview.

Another surprise was not about V P Singh, but about Devi Lal, and how poorly his colleagues thought of him.

When the prospect of Devi Lal becoming prime minister after the Janata Dal’s 1989 Lok Sabha poll win arose, I discovered that some of his own lieutenants had been appalled and done their best to prevent it — not because of any political or caste considerations, but simply because they thought Devi Lal would embarrass the country!

If there is any one indisputable aspect that emerges about V P Singh, it is that he was always concerned about his personal image. Would you agree?

Absolutely. That is why it is ironical that after his decision to implement the Mandal Commission Report, he acquired such a villainous reputation among articulate sections in India.

That must have really hurt. While he loathed being seen as power hungry and posed often as a reluctant politician, he was always ambitious and did everything he could to ascend high offices, right from the way he pulled strings to become an MLA to doing a volte face after declaring that he would not be a PM candidate.
Also, the way he returned to active politics after a hiatus.

Yes, your observation is spot on about his ambition and ostensible denial of it.

I cannot put it any better. He came back to politics in 1999 because he could not bring himself to stay away — “It is hard for a tiger not to hunt”, as his son Ajeya Singh put it.

While V P Singh is synonymous with Mandal and is remembered to an extent for his stance against corruption when he ordered raids against big conglomerates including Reliance as well as the inquiry on the HDW payoff, you try to give him credit for certain other policy initiatives that he began and his successors completed such as sowing the seeds of liberalisation and Right to Information Act.

He did take those initiatives and does deserve credit for trying.

But his stints both as prime minister and finance minister earlier were too short for him to achieve any more than he did.

Did you feel that V P Singh was one of the most misunderstood politicians in Indian history?

He is not misunderstood, but he is needlessly maligned for seeking to enforce the Mandal Commission Report giving 27 percent reservation in central government jobs to the Other Backward Classes, which is what he is also remembered mostly for.

There is no doubt that OBCs do deserve such reservation, considering they had been discriminated against in past centuries and their representation in these jobs was abysmally low.

The fact that such a hue and cry was made about it when the decision was taken, even though central government jobs comprise barely 1 per cent of the total number of jobs in the country, reflects — I am sorry to say — the strong casteist bias of the upper and intermediate castes. 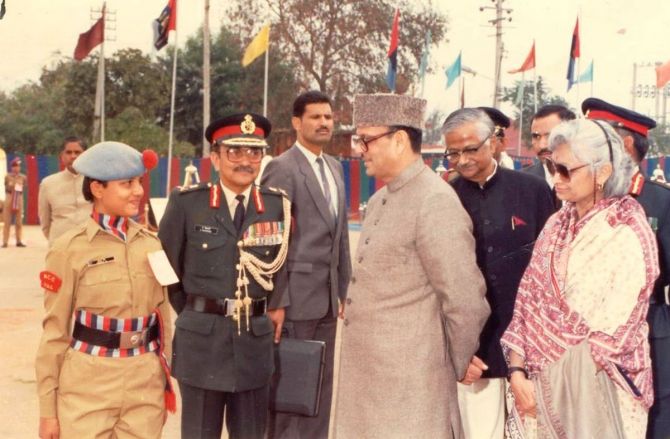 After coming to power on the issue of fight against corruption, he resurrected the Mandal Commission Report and made social justice his main agenda.
Was this born out of a deep-rooted conviction or was it the move by a political genius to awaken the OBCs, hitherto a sleeping giant of a vote bank?

No, it was not born out of any deep-rooted conviction.

As his close associate Som Pal told me, ‘Mandal was never V P Singh’s brainchild. It was a Janata Party commitment he inherited.’

It was part of his party’s — the Janata Dal’s — manifesto, for reasons I have explained in detail in the book — and V P Singh was determined to implement the manifesto.

He would have done it anyway at some point, but the specific timing of his decision was dictated entirely by political exigency — his government was threatened.

In hindsight, it also turned out to be a game changer in Indian politics, awakening the sleeping giant of a vote bank — the OBC vote bank — as you correctly put it.

While V P Singh was adept at bringing together all kinds of disparate leaders under one umbrella, he was also a disaster when it came to maintaining friendships. Correct?

The seeds of the failure of V P Singh’s government lay in the very manner in which the disparate leaders had been brought together.

It was done so hastily, ignoring the inherent contradictions among the parties and personal animosities among their leaders, that the collapse of the coalition was inevitable.

In his interview to me, Arif Mohammad Khan (now governor of Kerala) said he had warned V P Singh this would happen. 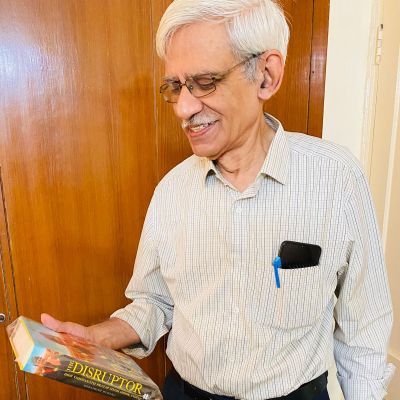 The Disruptor could well have been a book about Rajiv Gandhi. For the layman who believed that Rajiv was a reluctant politician, an honest man thrust into the whirlpool of politics and tried to do his best, there are many fresh insights.
He comes across as a shrewd and calculating leader, as adept at playing politics as his mother.

Yes, Rajiv Gandhi was naive when he entered politics, but quickly learnt the ropes.

He certainly became shrewd and calculating, but I feel, not half as wise as his mother.

If there were defence deals with illegal commissions whose details he wanted to conceal, why on earth did he make V P Singh defence minister after shifting him from the finance ministry? He could have given him any other important portfolio.

He had seen V P Singh functioning as finance minister, and the way he went after corporate corruption. Then why make him defence minister?

That he was offered prime ministership once again in 1996 and he literally ran away, giving the slip to National Front chief ministers is perhaps a little-known episode in Indian political history.
Did he shun power that time because he knew that the Congress would ditch him sooner rather than later?

I think it was a mix of motives. He did fear the Congress would ditch him sooner rather than later, and did not want another short-lived term as prime minister.

But he was indeed ill — both his renal failure and his myeloma had been confirmed by then — and must have felt he would not be able to put in the physical and mental effort required for the job.

Maybe he also felt embarrassed about becoming prime minister when he had not contributed to the United Front’s victory in any significant way, having neither campaigned much nor contested the 1996 election himself due to his poor health. 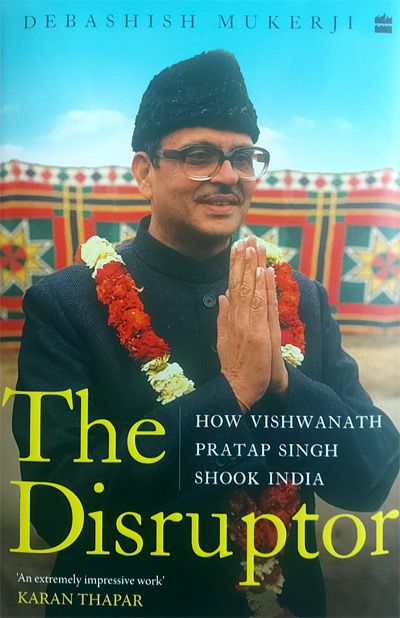 Though you have not explicitly said so in the book, there are certain similarities between V P Singh’s career and that of Gandhi’s.
The way he was at least seen as being reluctant to take up high offices, giving away his land to the Bhoodan movement, always maintaining a Mr Clean image and finally not allowing his son Ajeya to enter active politics.
Was all this part of a carefully crafted plan or was he a true Gandhian?

V P Singh was certainly strongly influenced by Gandhi, and there was a time — during his campaign against Rajiv Gandhi and Congress corruption, roughly from 1987 to end 1989 (when he became prime minister), when he did seem to think he was emulating Gandhi.

There is an incident which I could not fit into my book — he allowed himself once to be photographed by the noted Mumbai photographer Gautam Patole, in typical Gandhi style, his chest bare, wearing a dhoti, his head completely shaved, sitting with his legs tucked under him (a favourite Gandhi pose), where he really looks like a cross between Ben Kingsley in Gandhi and the real Gandhi.

The photograph raised much controversy, and V P Singh did not allow a repeat.