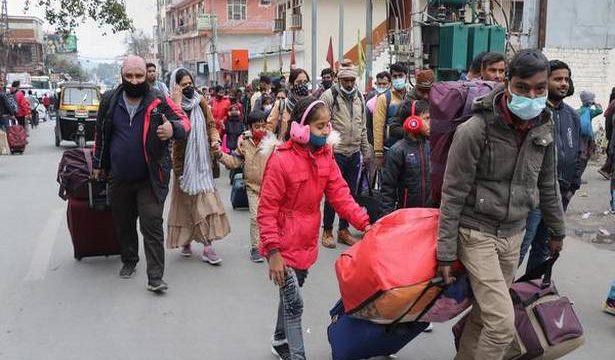 The Mata Vaishno Devi yatra is going on smoothly despite the early Saturday morning stampede that killed 12 people and left several others injured, an official spokesperson said, adding that about 27,000 pilgrims offered prayers at the cave shrine during the day.

After the stampede, the rescue operation was launched promptly by a joint team of the Shri Mata Vaishno Devi Shrine Board, the district administration, police and the CRPF, the government spokesman said in a statement, adding "the situation was brought under control within a span of five minutes".

"The yatra is continuing smoothly, with approximately 27,000 pilgrims having done darshan at the holy shrine today (Saturday)," the spokesman said.

He said Lieutenant Governor Manoj Sinha, who is also the chairperson of the shrine board, has been personally monitoring the whole situation since early morning and also visited the Super-Specialty Hospital, Kakryal, and enquired about the health of theinjured pilgrims and interacted with them.

He also directed the officials to ensure that the ex gratia amount of ₹10 lakhs for the deceased and ₹2 lakhs for the injured, already announced by the government, should be released in favour of the legal heirs on priority in a hassle free manner, the spokesman said.

Meanwhile, the members of the inquiry committee constituted probe the incident visited the site of the occurrence at Bhawan this evening and took a first-hand account.

He said the committee mentioned that further details are being sought after which any conclusive findings can be drawn.

However, prima facie it appears that some kind of minor scuffle between few pilgrims may have led to the stampede near Gate no.3, where the pathway has a steep gradient, the spokesman said.

He said the ADGP and Divisional Commissioner lauded the efforts of the field teams of Shrine Board, district administration, Police and CRPF, who were manning the Bhawan area, for their prompt action and bringing the situation immediately under control, thereby averting any further loss.