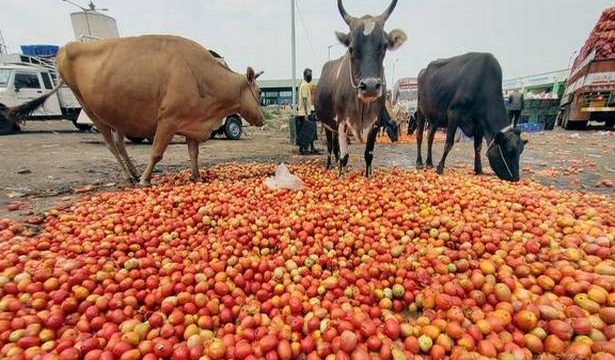 Purchase window time of four hours is too narrow, they complain

Vegetable rates crashed at the APMC market on Friday forcing the farmers to dump large quantity of tomato and other produce on the roads.

Bulk of the vegetables to Mysuru APMC comes from K.R. Nagar, Bilikeri, H.D. Kote, Bannur, T. Narsipur, Srirangapatna and other places. Tomato is procured from Nagamangala and K.R. Pet and the downward spiral of prices left the farmers in the lurch.

The APMC yard was strewn with tomatoes and other vegetables and vendors have complained that the situation is worse than what it was during the pandemic last year.

Nagaraj, a vegetable farmer, said that the narrow window of 6 a.m. to 10 a.m. creates lot of anxiety among the purchasers and the farmers and rates tend to crash from 8.30 a.m onwards when there are no buyers for the produce at the market rate. “The police convoy enters the APMC yard around 9 a.m and goes around with a loudspeaker announcement that they should shut shops by 10 a.m. This creates a panic situation and people tend to even drop their plans of bulk purchase and head towards the exit gate’’, said Mr. Nagaraj.

Many a times farmers beg and plead with ustomers to buy the produce at whatever rate the later wish to pay and leave the unsold vegetables in the APMC yard.

The situation is such that a farmer let his cattle graze the vegetable that he had cultivated on his plot of land in Ganjam near Srirangapatna as the market rates were not remunerative.

The narrow window of 6 a.m. to 10 a.m is causing lot of problems to the farmers and vendors and hence the local stakeholders have sought an extension of the timing. The issue has also been raised by Mysore Chamber of Commerce and Industry which want the window period to be increased to enable the trading community to complete the business.

Meanwhile, the number of vegetable trucks going from Mysuru to Kerala and Tamil Nadu has dwindled and the farmers are finding it difficult to find a local market for the crop, said Mr. Nagaraj.