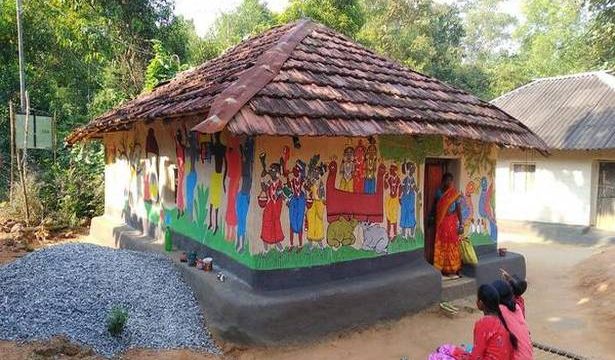 Tiny Lalbazar, transformed into a centre for tribal art and handicrafts, is set to lose its sole access to the outside world

Residents of a West Bengal village that has recently been transformed into an art hub, are running from pillar to post to prevent a construction that threatens to cut them off from the outside world.

The tiny village of Lalbazar, surrounded by forests, sits close to the State’s border with Jharkhand, and has a population of some 80 people. Also known as Khwabgaon — or dream village, a name given to it by art lovers — it is located 4 km from Jhargram, the nearest town and their window to the world. However, a boundary wall being constructed to secure a vast stretch of land — belonging to the police department — is set to block the path connecting the two settlements.

“Not only Lalbazar, another hamlet called Khoarashuli will also lose its access to Jhargram. We have written to several officials, including the Chief Secretary, and are hoping that the path is allowed to stay,” said Kolkata-based artist Mrinal Mandal, 42, who single-handedly transformed Lalbazar into an art hub by teaching art to the villagers, who belong to the reclusive Lodha tribe.

It was in 2018 that Mr. Mandal chanced upon this village and took an instant liking for it and decided to stay on to teach art to its residents. He lives in Jhargram and commutes to Lalbazar every day, something that won’t be possible once the construction of the wall is complete.

Saying that the road is their only way to commute and to stay connected with the town of Jhargram, Mr. Mandal, a founding member of the Kolkata-based Chalchitra Academy, has written to various officials.

“We have been successful in putting this small village on the cultural map of West Bengal. Tourists frequent the village and support the villagers by purchasing handicrafts made here. Our capacity-building initiatives are slowly bringing these Lodha villagers out of abject poverty and illiteracy. If the road gets blocked, the villagers will lose complete access to the town, and that will affect their daily lives. We will also be unable to continue with our social welfare initiatives if the village road gets blocked completely,” Mr. Mandal wrote.

Officials could not be immediately reached for comment. In recent years, tourists have been coming to Lalbazar not just to buy handicrafts but also to take a look at the village itself, where the very walls of houses are works of art.

Until Mr. Mandal — funded by Chalchitra Academcy — began to teach them art and hold workshops, the villagers mainly worked as labourers in nearby farms and some of them were small farmers. Today they are trained in kutum-katum (handicrafts made from twigs and roots), kantha work (a form of embroidery), pottery and mural painting.