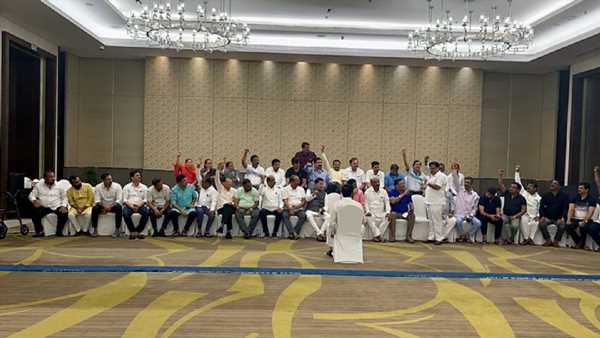 ‘We don’t know yet if we are forming the next government with the BJP or not.’

Can you believe this?

North East India’s first five-star hotel, the Radisson Blu hotel — managed by the Carlson Rezidor Hotel group and promoted by the Dharampal Satyapal group, which invested Rs 300 crore (Rs 3 billion) in 2014 to set up this hotel on 5 acres of land leased by the Assam government and which earns Rs 30 crore (Rs 300 million) annually out of it — is charging the Shiv Sena’s rebel MLAs just Rs 1,500 per night as room tariff.

As per the hotel’s Web site, the room tariff per night begins at anywhere between Rs 7,398.72 for a Deluxe Room to Rs 77,777 for a Presidential Suite (breakfast included), but try booking a room and you will find that there are no rooms available to rent for guests between June 29 and July 8.

The Shiv Sena MLAs flew to Guwahati in several chartered flights since June 22, 2022, and have been staying at the Radisson Blu hotel.

“We foot our own bill,” Shrinivas Chintaman Vanga — the Shiv Sena MLA from Palghar, the township north of Mumbai — tells Prasanna D Zore/Rediff.com when asked who is bearing the expenses for his stay at the hotel.

When the same question is posed to Deepak Kesarkar — the Eknath Shinde group’s spokesperson and Sthe hiv Sena MLA from Sawantwadi — he says “every MLA is footing their own bill and every rebel Shiv Sena MLA in Guwahati is capable of affording their own expenses.”

Shinde, Kesarkar says, developed “good relationships with many chartered flight operators during his tenure as minister”. Shinde was the Public Works Department minister between 2014 and 2019 when the Shiv Sena was part of the Devendra Fadnavis-led alliance government and since 2019 as Urban Development minister in the Maha Vikas Aghadi government. Kesarkar said Shinde has been instrumental in arranging chartered flights for rebel MLAs.

“Eknathji would often arrange charter flights for Uddhavji (Maharashtra Chief Minister Uddhav Thackeray) too. He (Shinde) is well connected,” Kesarkar says when asked about who is paying for the chartered flights.

Vanga says the rebel Shiv Sena MLAs will return to Mumbai soon. “We will soon leave for Mumbai. I am not sure, but we will be in Mumbai in the next three days.”

“I don’t know much about the discussions about government formation in Maharshtra. Our leader Eknathji Shinde knows more about it,” says he.

“I am not aware about any discussion about responding to Uddhavji‘s letter, but our leaders will take care of it. Our chief whip will speak about it,” Vanga says about the Shiv Sena president’s offer of reconciliation sent via a letter on June 28.

Vanga refuted Shiv Sena MP Sanjay Raut and Maharashtra Minister Aditya Thackeray’s charge that the rebel MLAs have been forced by Eknath Shinde and the BJP to stay put in Guwahati.