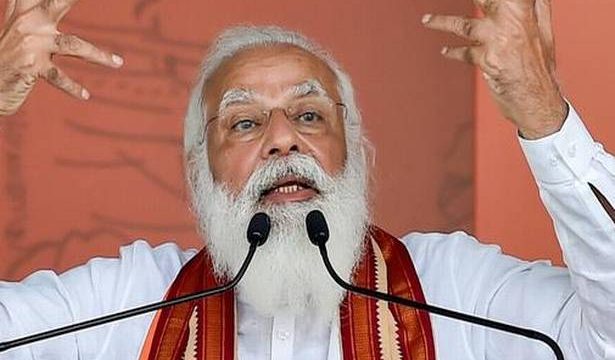 Prime Minister Narendra Modi on Tuesday said that West Bengal Chief Minister Mamata Banerjee’s appeal not to allow any division of Muslim votes was an indication that Muslims had deserted her.

During her poll campaign over the past few days, Ms. Banerjee has been making appeals that there should not be any split particularly in minority votes. The Trinamool Congress (TMC) chief’s remarks were directed against the Indian Secular Front, which has fielded a significant number of candidates in constituencies with a significant Muslim population.

“Didi recently asked all Muslims to vote en bloc for her. It shows that the Muslim vote bank is slipping out of her hands,” the Prime Minister said, addressing a rally at Cooch Behar in north Bengal.

On Monday, the Bharatiya Janata Party (BJP) leadership approached the Election Commission of India alleging that Ms. Banerjee had violated the Representation of the People’s Act by asking Muslims to come together and vote for her party. Interestingly, Mr. Modi made these remarks on a day when a number of constituencies with a significant minority population spread across three districts went to polls in southern Bengal.

The Prime Minister, who addressed two public meetings in West Bengal, one in Cooch Behar and another in Howrah district, also responded to the Chief Minister’s remark that BJP leaders predicting the party’s victory were “Gods or superhumans”.

"There is no need to trouble God to find out who is winning the polls in West Bengal. Janata Janardhana (the supreme public), in the form of God, have given their response,” Mr. Modi said, adding that the TMC’s loss looked imminent in the election. “Didi, your anger indicates you have lost the polls,” Mr. Modi said.

Mr. Modi also targeted Ms. Banerjee for alleging that people attending the BJP’s rallies were doing so in return for cash.