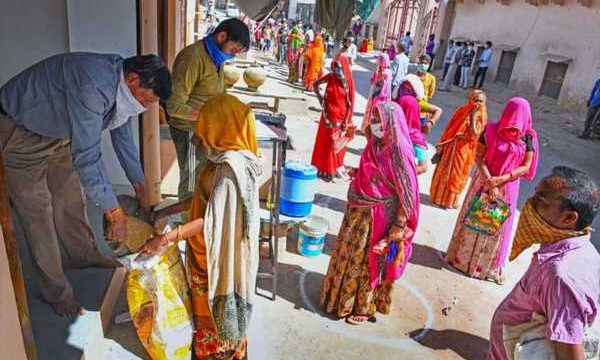 The government’s food subsidy in the ongoing fiscal year is expected to be a little less than Rs 4 trillion.

Addressing reporters in New Delhi, the food secretary said around Rs 2.25 trillion subsidy is estimated for procurement and distribution of food grains under the National Food Security Act (NFSA), while an additional Rs 1.47 trillion has been incurred for implementing the Pradhan Mantri Garib Kalyan Anna Yojana (PMGKAY).

The Budget Estimate for food subsidy in FY22 is around Rs 2.43 trillion, according to Budget papers.

For FY21, the Revised Estimate for food subsidy was around Rs 4.23 trillion.

However, the Centre pumped in some more funds to clear all dues by the time the year ended.

Under NFSA, the Centre gives highly subsidised food grains at Rs 1-Rs 3 per kg to over 810 million people through the public distribution system .

Over that, the government has been supplying free food grains to NFSA beneficiaries during the pandemic under the PMGKAY.

This scheme is valid till March 2022.

Food Corporation of India Chairman Atish Chandra said FCI has engaged an independent agency to do third-party assessment of all procurement and storage operations for wheat and rice, and also plans to eliminate all non-scientific storage for grains by March 2022.

“We can assure that very soon there won’t be any long-term storage of grains,” Chandra said.

Meanwhile, the food secretary said there had been a 62 per cent growth in ethanol blending in the current calendar year.

Ethanol blending with petrol increased from 5.0 per cent to 8.1 per cent in one year, the highest ever, he said.

Under the ‘One Nation, One Ration Card’ (ONORC) programme, over 500 million portable transactions have been recorded, delivering more than Rs 33,000 crore (Rs 330 billion) subsidy on food grains.

“During the pandemic period alone, over 430 million transactions have happened with delivered food subsidies of Rs 29,000 crore (Rs 290 billion),” he said.

“Delhi, which started very late, is registering one of the highest numbers of inter-state portable transactions through ONORC,” he said.

On the issue of rising edible oil prices in India, Pandey said that following the government’s intervention prices were cooling off consistently, and a further drop was expected with the arrival of a better mustard crop from the rabi season.

On other essential food commodities, he said retail prices of rice and wheat were “very stable”, while prices of pulses have stabilised and vegetables, especially onion, potato and tomato, have eased.

Pandey added that the Centre was in the final stages of developing a system to capture the data of the homeless who do not have ration cards, so that subsidised foodgrains could be given.

“States have been told to expedite the process of identification so that 16 million eligible people under NFSA are not left out.”

Since the homeless and the destitute have no ration card in the absence of an identity card or residential address, they are not covered under either NFSA or PMGKAY.

“States have been told to expedite the process of identification, so that 1.6 crore eligible people under NFSA are not left out,” Pandey said.

Another food ministry official said states have lifted 1.121 million tonnes of foodgrain in the current fiscal year for distribution to people not covered under the NFSA.

State governments purchased over 1.1 million tonnes of foodgrain under the Centre’s open market sale scheme in 2021-2022, he said.