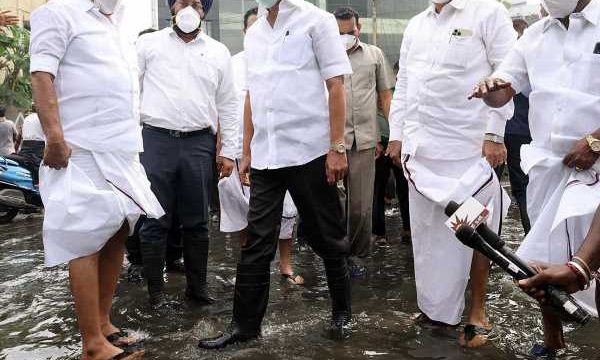 The chief minister still has time to repair the damage but he will have to act all-round, both at the government and party levels, suggests N Sathiya Moorthy. For a government that won people’s hearts cutting across class and castes, the ruling Dravida Munnetra Kazhagam in Tamil Nadu is facing bigger challenges than it had bargained for.

The Covid pandemic is one of them and is a global phenomenon.

Even as Tamil Nadu was settling down to the reality and was beginning to recover on the economic front as the rest of the country, came unprecedented rains across most of the state, putting the official machinery simply out of gear.

Truth be told, the state is going to take a lot of time to recover from the breakdown of civic infrastructure, which was already creaking at all points.

Roads and drains, rivers, and canals are all in a bad shape, requiring massive funds and a lot more time for restoration than what the government may have budgeted for in the normal course.

Of course, there is a political blame game, which now includes the targeting of the Bharatiya Janata Party-ruled Centre not releasing adequate funds and in time.

Having criticised Chief Minister M K Stalin all through his eight-month-old regime in the previous year, state BJP president K Annamalai is at pains to explain away the charges of political bias. 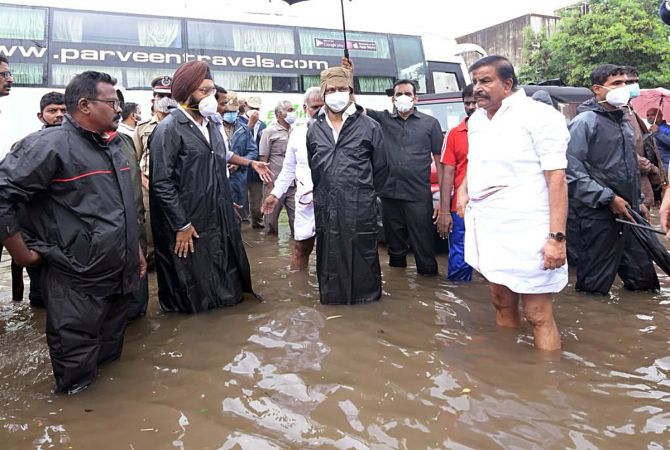 There is general acceptance that the rain-induced flooding was kind of unprecedented this time around.

The western region did not take the hit of the rains and floods during the northeast monsoon season. The rest suffered.

The plight of metropolitan Chennai was among the worst.

After the 2005 cyclonic storm, when for the first time in living memory, fishermen plied their craft to secure the marooned even on main thoroughfares, it happened this time too.

If the first round was bad, the unanticipated second round towards the year-end, initially attributed to cloud-burst kind of an occurrence, which it was not, worsened the situation for a city still limping back to normalcy.

This is not the first time in recent years the state, including the city, had suffered this badly.

It happened first in 2015, when a belated government decision, caused by alleged miscommunication involving then chief minister J Jayalalithaa, caused avoidable floods across much of Chennai city and suburbs.

The very next year, it was Cyclone Vardha that swept away Chennai while much of the rest of the state was spared in comparison.

Months later, many fishers out at sea when the cyclone stuck were still missing. In a way, starting with the early nineties, and unlike in the previous decades, both the incidence of cyclonic storms and rain-fed flooding have become an increasingly frequent affair in the state.

Small mercy this time was that the rain-floods were not caused by cyclonic storms, as the devastation would have been worse than already.

The people readily acknowledge that the previous AIADMK government did not do enough to set right the drainage systems across the state, more especially the state capital after the previous floods had pointed to the recurring nature and also the severity of the destruction.

Translated, they are ready to accept the ruling DMK’s reiteration that much of the blame rests in the previous government for not taking remedial measures even after burning its hands, leaving the incumbent with little time, and lesser resources, to repair the damage.

However, in real terms, when they have to keep pushing out water from their homes and stores repeatedly even days/weeks after the floods, the common man’s frustrations do tell upon the government’s image.

Barring Stalin, and select officials in localities that are lucky enough to have them, no minister or ruling party MP or MLA is known to have reached out to the affected populations, in whichever region or area, class or caste, they belonged to.

If a minister was standing in ankle/knee-deep water, it was because he was accompanying the chief minister, who was already doing so.

No one seemed to have asked, nor has anyone said, why some of these ministers were tagging along with the chief minister when their presence and services were required even more in their own constituencies.

Likewise, for the first time ever, ruling party legislators and parliamentarians seemed to be conspicuous by their absence from where they were required the most, floods or otherwise.

If a DMK legislator or parliamentarian is in the news, and his picture is going viral on social media, it is only because of an unsavory act, going as far as to include crimes, including murder, bringing a bad name to the party, government and particularly the chief minister. 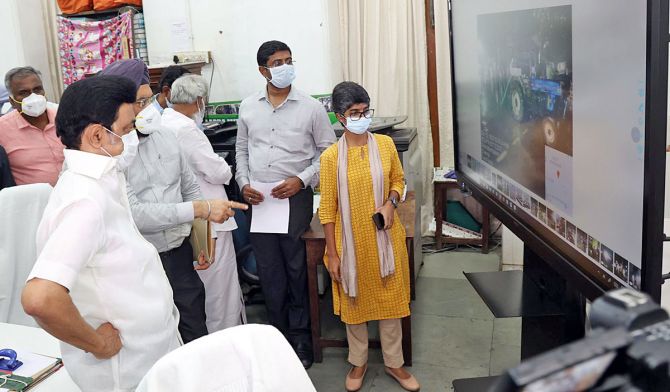 As party chief, Stalin began well by sacking a cadre who had pulled down a hoarding outside the premises of ‘Amma Canteen’ in a Chennai suburb, a day after assembly poll results were announced in May.

The canteens were set up by the previous AIADMK government to make quality food available to the people at a cheaper rate.

Stalin had intervened likewise, earlier and later, but lately, the alleged involvement of party MLAs and MPs in incidents that are worse than the one recorded earlier, finds himself in a fix.

Slowly but surely this too has begun tainting his positive image, which showed up immediately after the poll results were announced and more so after he became CM.

If nothing else, the incessant media campaign by political rival AIADMK, which has much to cover and cover up, and also the non-stop charges being leveled by state BJP chief K Annamalai may have started to get listeners.

Whether they accept those charges is a matter of conjure, where the DMK is still at a great advantage.

No other Dravidian chief minister barring founder C N Annadurai was seen as being sincere to the job by all sections as Stalin was at the inauguration.

His novel idea of setting up an independent economic advisory council for the chief minister made the entire nation, and investors from outside look up and take notice.

Overnight, Stalin became the darling of economists, veteran administrators, and the national media, for what he was attempting to achieve.

Nearer home, people cutting across party lines, regions and classes felt that he was trying to be different, trying to do something better for them, compared to his predecessors.

He needed time and encouragement, was the chorus, at times on the formal and social media, but mostly left unsaid.

Today, there is an expectation of wanting to see him live up to the image that others had portrayed of him.

Rather, individuals have had individual perspectives of the chief minister, most of them positive, and they expect him to meet their own aspirations about him.

This is a tall order that can be said or explained. But on it also hangs the future electoral prospects of the party, where he also has to firmly put in place a succession plan, though not necessarily for immediate implementation. 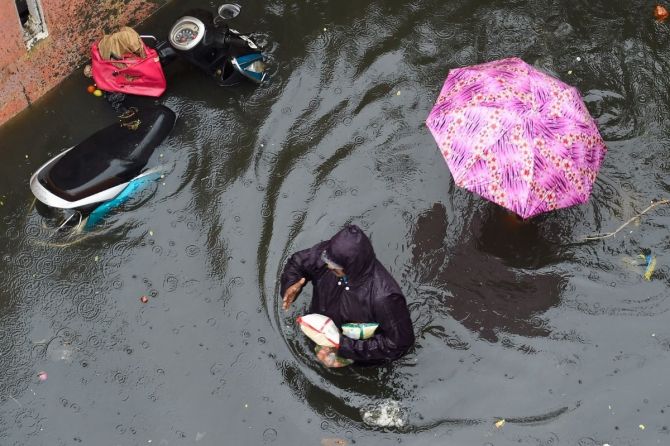 There is deadwood in the party hierarchy occupying ministerial and other legislative positions who would not vacate.

He might have also passed the time for taking bold, new steps to weed them out when he became chief minister.

He has also been reluctant to do so, having worked and grown with them through his 50 long years in politics.

Age is on the side of many of them, so also is their seniority.

This has also become a cover for them not to do fieldwork, which has been at the heart of Dravidian political successes over the past several decades.

Worse still, many of them are said to be bossing over their district units from the distance that Chennai offers, and not allowing the second and third-generation leaders, who are equally capable and even more agile, to come up the ladder.

Their overnight exit at some point in time could thus leave behind a vacuum in local-level leaderships, impinging on the party’s political and electoral work at the grassroots level.

The question is also being asked if an early yet inevitable induction of the party’s youth wing boss, Udayanidhi Stalin, MLA, and the chief minister’s son, would create similar opportunities across the board, for the next generation to claim its due place when the going is still good for the party and the leadership.

This apart, having inherited a bureaucracy that had got completely tuned to the AIADMK’s ways of doing things since the party returned to power in 2011, and for 10 long years, with some not having anticipated a DMK victory last year, the officialdom is yet to tune itself fully to the new and positive image that Stalin wants to project, not only in terms of his party and leadership but also about the very concept of ‘governance’.

There are reasons. Already, the pulp and social media, if not the more traditional sections of the media, have begun alleging irregularities and ministerial-level corruption.

While none of them has touched the chief minister, ultimately as the party’s main public face and vote-getter, it is Stalin’s image that would begin suffering, if he did not buck the trend early on. 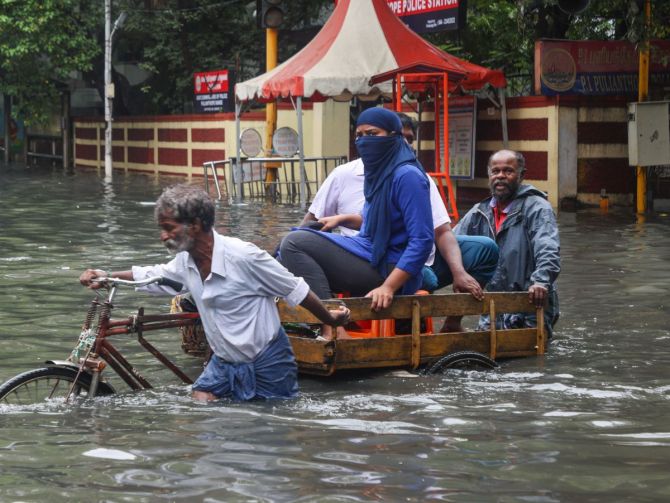 The chief minister still seems to have time to repair the ensuing damage but he will have to act all-round, both at the government and party levels.

At the government level, it involves both non-performing and/or graft-tainted ministers and inefficient/ineffective officials, whose loyalty is not to the government as an institution but to a party that was in power in the past, and maybe in the future, too.

The stage may be set by the results of the state-wide urban local bodies polls, which the predecessor government shied away from facing, fearing an early rout before the Lok Sabha polls of 2019 and assembly elections in May last.

The DMK front had swept most urban centres, including most corporation areas, including Chennai.

The assembly polls witnessed the pattern set during the LS elections, barring in the western region, where the AIADMK still held its traditional sway.

The rains and floods have not affected the region, in a way, it is the rest of the state that will come under a test for the ruling party.

It is not unlikely that the DMK could still sweep many corporations and municipal councils, but hope for the rival AIADMK, PMK, and BJP is what they want for being in business and being heard until the parliamentary polls of 2024.

That is what the test is all about for the Stalin leadership at the moment, the results of the urban polls almost coinciding with those of the assembly elections in five states, including Uttar Pradesh and Punjab, where the whole nation is keenly watching the poll proceedings, already.